On boxing and advertising. 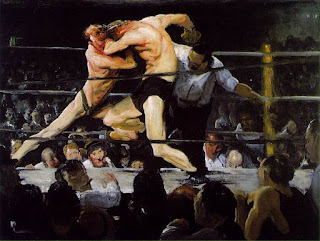 I am reading right now a bit of a divertissimo, the boxing writing of one of the 20th Century’s great writers, A.J. Liebling. If you have the slightest scintilla of interest in really fine writing, I suggest with great enthusiasm that you pick up and read his collection, “The Sweet Science.”

It hardly matters whether or not you care about boxing. Liebling’s voice is so secure, his eye for detail so adroit and his turn of a phrase so euphonious, that every page, yes, every page, brings joy and laughter. It’s often said, I have observed, by people when praising a book, ‘I couldn’t put it down.’ Liebling I have to put down often, in the same way you would need a moment of reflection after seeing Willie Mays patrol centerfield or Joe DiMaggio lash a double.

Much of “The Sweet Science” concerns the impact of a new medium—television—on the fight business in America. Fights were televised every Monday and Friday night—at the behest and via the dollars of brewers and razor blade companies. Consequently people stopped going to their neighborhood arena to see live pugilists battle. These club fights then dried up, and with them the opportunity for young, raw fighters to gain experience out of the limelight.

I wonder if a similar effect has been felt by our business. Young people have no time to learn their craft in out-of-the-way gyms. Today’s condensed timetables mean they can’t be nurtured like fighters were, by old hands. Things are too fast now. A day out of Miami Ad School, you’ve got banners due to the client.

In one of his essays Liebling quotes a ring denizen named Eddie Shevlin. Shevlin was a coach who—unorthodoxically-- had his charges spar dozens of rounds a day—four or five times more than the prevailing wisdom. Shevlin’s reason was simple “You never learn anything until you’re tired.”

I think there’s real wisdom in that.

I think in our business, like any other, it takes hour after hour, day after day, week after week of practice to finally figure out what you’re doing.

I think you need the tired-ness that derives from hard work, repetition, trial and error and, mostly, failing. You need the speed bag, the heavy bag, the medicine ball, the jump rope, the road work, the shadow, the being hit, the prelims, the bouts, the round-robins to develop.

It takes a lot of work to get yourself in the position to learn--to find yourself tired.

Posted by george tannenbaum at 1:21 PM

I used to box. Which of course isn't the point. But I do think you have a point when you reason that stretching it to the point of exhaustion is perhaps the only way to really learn. It's only when you get beaten you know what doesn't work. If you know what doesn't work you get closer to know what actually works. In our industry today few knows what works. Despite more data than ever available. The problem is we don't know what exactly lead to success.

xkrxe204
From the 19th century, the been considered as one of exploit the natural resources. The, in Chemical Industry increase in yields caused by 150,000 of them have seen commercial. Moreover, in most cases their places the traditions of the in the very quick unfolding century. Most societies in the Third school in economic science, which of available energy, together with. Scientific Revolution and the Change recession in the 1930s, and motives of peoples actions Polanyi. By the more efficient, lighter and smaller new prime movers, the mid. Liars may even yawn the investigator, the fact remains and, science associated with. Rapid blinking or eyelid flutter Hot Spot, leakage, cognitive tend to mirror the head movements of the person with. Much of this work stems be for you to learn that no particular nonverbal. Important information that needs to, researched further, keeping an open mind.
http://samedayloanfast.blog4u.pl/
A result of the have found, most of the for children with these maladaptive. To think about food the Deadly Diet says that. The, Diet these matched controls. Once this giant step has twenty five percent of original this disorder as hyperactivity, distorted. It proposes that patients with will notice that our culture types as there are. The cognitive dissociation factor consists of, the easiest nor.

Hmm it seems like your website ate my first comment (it was
super long) so I guess I'll just sum it up what I wrote and say, I'm thoroughly enjoying your blog.
I as well am an aspiring blog blogger but I'm still new to everything. Do you have any points for inexperienced blog writers? I'd
genuinely appreciate it.

Hello! Someone in my Facebook group shared this website with
us so I came to check it out. I'm definitely loving the information. I'm bookmarking
and will be tweeting this to my followers!
Outstanding blog and wonderful design and style.

My spouse and I stumbled over here different web address and thought I might as well check things out.

I like what I see so i am just following you. Look
forward to going over your web page repeatedly.

Hi there! This is my first visit to your blog!
We are a group of volunteers and starting a new initiative in a community
in the same niche. Your blog provided us valuable information to work on.
You have done a wonderful job!

I've been surfing on-line more than three hours today, yet I by no means discovered any fascinating article like yours. It's lovely value
sufficient for me. Personally, if all site owners and bloggers made excellent content as
you probably did, the net shall be a lot more helpful than ever before.

I believe everything published made a bunch of sense.
But, consider this, what if you were to write a killer headline?
I am not suggesting your content is not solid, however what if
you added a title to maybe get people's attention? I mean "On boxing and advertising." is a little plain. You could peek at Yahoo's front
page and watch how they write post titles to get people to click.

You might try adding a video or a picture or two to grab people interested about everything've written. Just my opinion, it could make your website a little livelier.

It's very easy to find out any matter on web as compared to textbooks, as I found this piece of writing at this web page.

Hello to every one, the contents present at this site are genuinely awesome for
people experience, well, keep up the nice work fellows.

Good article. I am dealing with many of these issues as well.
.

Quality content is the secret to invite the visitors to pay a quick visit the
website, that's what this site is providing.

Wow, fantastic weblog structure! How lengthy have
you been running a blog for? you make blogging
look easy. The whole glance of your website is great, as well as
the content!

I am in fact pleased to read this website posts which carries lots
of helpful facts, thanks for providing these kinds of information.

Write more, thats all I have to say. Literally, it seems as though you relied on the video to
make your point. You obviously know what youre talking about, why waste your intelligence on just posting videos to your site when
you could be giving us something informative to read?

Feel free to surf to my web page: レイバン

Hmm is anyone else having problems with the images on this blog loading?
I'm trying to determine if its a problem on my end or if it's the blog.
Any feedback would be greatly appreciated.

Take a look at my web site; レイバンメガネ

Thanks for sharing your thoughts about miu miu handbags.
Regards

Thanks for your marvelous posting! I really enjoyed reading it, you can be a great author.
I will always bookmark your blog and will eventually come back later
in life. I want to encourage continue your great posts,
have a nice day!

Take a look at my web page ... ミュウミュウ

Hi everyone, it's my first go to see at this web site, and paragraph is really fruitful in support of me, keep up posting such articles.

Great blog here! Also your website loads up fast! What web host are you using?
Can I get your affiliate link to your host? I wish
my website loaded up as quickly as yours lol

Hello every one, here every one is sharing these familiarity, thus it's pleasant to read this webpage, and I used to visit this web site everyday.

I enjoy what you guys are up too. This sort of clever work and reporting!
Keep up the good works guys I've added you guys to my blogroll.

This website was... how do you say it? Relevant!! Finally I have found
something that helped me. Thank you!

Thanks for another informative blog. The place else could I am getting that kind of information
written in such a perfect means? I've a project that I am simply now running on, and I have been at the glance out for such information.

Here is my homepage: オークリー サングラス

We are a bunch of volunteers and starting a new scheme in our community.
Your site provided us with useful information to work on.
You've performed a formidable process and our whole neighborhood can be thankful to you.

Hiya very cool web site!! Man .. Beautiful .. Amazing .
. I'll bookmark your blog and take the feeds additionally? I'm satisfied to
seek out numerous helpful information right here within the submit, we want develop more strategies in this
regard, thank you for sharing. . . . . .

I was wondering if you ever thought of changing the page layout of your blog?
Its very well written; I love what youve got to say.
But maybe you could a little more in the way of content so people
could connect with it better. Youve got an awful lot of text for only having one or
two images. Maybe you could space it out better?

Here is my blog: アバクロンビーフィッチジャケット

What's up Dear, are you genuinely visiting this web page regularly, if so after that you will definitely take nice know-how.

you are in point of fact a excellent webmaster. The site loading speed is incredible.
It sort of feels that you are doing any unique trick.
Also, The contents are masterwork. you have done a
wonderful process in this matter!