A Labor Day tale of labor and loss.

I posted this ten years ago when I was working at R/GA across the street from the Finck Building on West 39th Street between 8th and 9th avenues, the veritable bowels of New York, in the shadow of the apotheosis of urination, the Port Authority.

While the rest of the civilized world recognizes May 1st as Labor Day--the Great Retrograde Satan--America—has stuck it in September, so as to separate labor from any tinge of socialism. communism, Wobblieism or any other ism that doesn't involve having capital exploit the working classes down to their waning sinew.

So, the richest nation on earth, and the only advanced nation with virtually no social safety net, no health care, no decent housing, thirty million unemployed, thirty-seven million people struggling with food sufficiency (including eleven million children) and an aggregate homeless population equivalent to the 31st largest city in the country, Labor Day does nothing for workers, no one does, except provide them with mattress sales, 60-months of free-financing and three-day-delivery to qualified customers, void where prohibited.

Be that as it may, my tribute to labor. 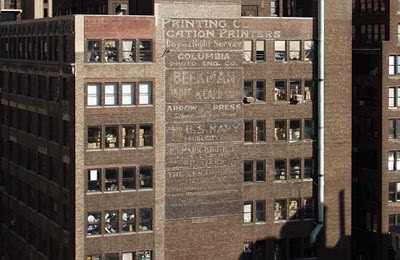 For the time being (what in advertising isn't for the time being?) I work across from the Finck Building. I got in at 7AM this morning and did a bit of research on the edifice.

Moshe Finck was 12 when he arrived at Ellis Island just before the Great War broke out, with his father Bensalem, an itinerant bootmaker from the eponymous Finck, Austria. Like so many poor, immigrant Jews before them, Finck pere and fils settled on the Lower East Side and began scrounging for work.

Bootmaking, being a heavily unionized trade, was closed to the Fincks so they applied their manual skills to the garment trade, originally working at the Triangle Shirt Waist Factory. The Fincks survived the famous fire at that factory only to see the elder Finck crushed to death when a 306-lb. seamstress fleeing the fire leapt 13 stories to her death and landed on Bensalem, killing him in a flurry of garters and bloomers and hatpins.

Undaunted by this horrible tragedy and still only a teenager, Moshe redoubled his efforts, sewing night and day. Eventually after five years of working eighteen hour days, Finck had saved enough money to open a small garment factory on Avenue D and 11th Street. "Finck's" he called it, specializing in "dickies, ascots and other affairs of the neck."

Fortune shined on the young Finck. He entered the dickie manufacturing business just as the Roaring 20s Dickie Boom began. Dickies were all the rage--everyone from Babe Ruth to Warren Harding were wearing Finck Dickies. In fact "Lucky" Lindy was wearing a custom-designed Finck dickie when the Spirit of St. Louis crossed the Atlantic. "I hate those dirty sonofabitch Jews," said the dashing aviator upon landing in France, "but that cud of a Christ-killing goat can sew like Jesus himself."

Finck left the Lower East Side for a 12-room apartment on 127th Street and 5th Avenue--an arriviste Jewish neighborhood at the time. He was driven to work in a Dusenberg and was seen at Toots Shor's with high-rollers like Abe Rothstein, Bugsy Siegel and Toots himself. In 1928, F. Scott Fitzgerald wrote a story purportedly about Finck, "A Dickie As Big As The Ritz." It was lost when Zelda used the manuscript to light a candelabra containing some 300 tapers.

Then came the crash. And the dickie bubble burst like the tulip bubble before it and the South Seas bubble, too. Suddenly destitute men were selling dickies on street corners for a nickel a piece. Finck watched as all he worked for went down the tubes. He survived the Depression pressing clothes in Wo Hop's hand laundry, hands optional.

However, with World War II, Finck's fortunes returned. Suddenly the Army-Air Force's demand for aviator's scarves sky-rocketed. It was Lindbergh who remembered Finck. "He's a fuckin' immigrant Jew," the good-natured pilot grumbled "but he makes the finest dickies in the sky." RAF Ace, Robert Roland Stanford Tuck was wearing a Finck dickie when he downed three Messerschmitt Bf 109s and two Focke-Wulf 190s in a Hawker Hurricane with his engine leaking oil as British and French troops escaped the Nazi pincer on the shell-pocked shingle of Dunkerque.

Soon Finck Aviator Scarves were supplying 25% of all scarves to Allied pilots. Then 40%. By war's end, Finck was making 75% of all Allied aviator scarves and was employing over 1,000 scarf-makers.

Finck built the Finck Building in 1943 to house his massive operation.

Finck Aviator Scarves and its subsidiaries in Japan, Nicaragua, and up and down Africa's notorious "Dickie Coast,"  closed by the early 1960s bowing to both the advent closed cockpit aircraft and stiff Japanese competition.
Thousands of workers, and Finck himself slid into obscurity.
Posted by george tannenbaum at 7:15 AM