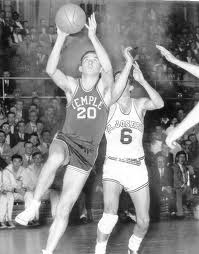 There's a young Polish woman who sits near me at work who, today, brought in a guide, in Polish, of the town in Poland in which she was born. The name of the town looked like a comic strip curse. Something like STKPRRYJ.

It reminded me of my father.

My father grew up poor in Philadelphia and somehow earned a scholarship to Philadelphia's Temple University. One class behind my father who was Temple class of 1951, was the great star of the Temple Owls basketball team. All-American Bill Mlkvy, a 6'4" forward, class of 1952 who was nicknamed, ingeniously, "The Owl without a Vowel."

In one college game, March 3, 1951 to be exact (my father was a few weeks short of graduation) Mlkvy poured in an unheard of 73 points in a game versus Wilkes University, his hands, I can only guess, like wild birds. At the time, it was an NCAA record.

Mlkvy went onto become a dentist (this is all I could find out about him) graduating from Temple University Dental School in 1955.
Posted by george tannenbaum at 11:34 AM

Moving dirt for foundation work 3. Collect information and data. Collect any and all information specific to the new facility. Since it is best to work from inside the facility out when considering new construction, dont let any building constraints restrict design. When considering existing space for the new facility, make sure the information includes accurate drawings showing column sizes and locations, dock and personnel doors and locations, ceiling height restrictions, and ceiling girder/joist construction. It is also important to collect all relevant product information pertaining to the number of stock keeping units (SKUs) to be stored and picked within the facility, along with their dimensional measurements, order history, and velocity data. If you sit down with no handling of the materials, a simple forklift license is going to be enough. Warehouse or pallet racking is a system that aids in the handling of materials on pallets and allows for a more efficient storage of the products. If you look at your average manufacturer you will find that they have a large variety of products that must be kept close and easy to retrieve. Some manufacturers may use a variety of small parts such as nuts or bolts, while others must store large motors or other boxes. Sometimes a manufacturer will deal with a specialized tool. This tool might not be used often, but when needed it must be easy to pull.