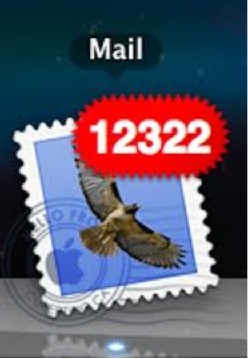 A friend wrote me an email last night.

"It happens almost every night. I check my email before I go to bed and my in-box is empty. When I wake up six or seven hours later there are 30 or 40 emails in it.

"I wouldn't mind if something of consequence was being thrashed out in these emails. If something important was being discussed and gotten to the bottom of. But, sadly, the surfeit of emails reflects just the opposite.

"Usually something of little consequence has bothered the client. Maybe it's the registered mark on the logo in the end frame of a TV spot looks pixelated. That starts the swirl. The client, of course, sends an email cc-ing about nine people at the agency.

"Naturally each one feels compelled to react. Some of those nine, say three, feel that an accusatory finger is being pointed in their direction. So they send an email deflecting responsibility. Another portion of the nine, big cheeses, usually wind up sending emails saying 'how did this happen,' as if this problem were on the same order of magnitude as global warming or nuclear proliferation. Then there is an eruption of emails from people out of the original nine who are clueless. They open the door in their emails to additional problems. They'll ask something extraneous like 'how does this issue effect residual payments?' This, of course, will precipitate another series of emails.

"Now what's important to note here is that NOTHING has gotten done. No one's fixed anything, reported on anything, unraveled any great mystery. No one's even gotten back to the client with how this issue will be addressed. Everyone has just 'covered their own non inconsiderable obliquities' and shunted the problem along some circuitous path.

"What they've created is something I call "The Swirlathon." A cacophony that's an admixture of blame, obfuscation, ignorance, denial and chatter. The fuel that makes agencies run.

Once in December while creating POS displays for a rather large and short sighted Roofing manufacture. After building, roofing and photographing six half roofs for the display banners which were yo printed and delivered by the end of January. I was informed that the client would like to have them by January 3rd for their annual sales mtg. With the Christmas holiday looming and printers schedule's full of work needed by the first of that month. we were in a jam. Print production was trying it's best to get at least a partial delivery by the new date. The VP Account sup called a come to jesus mtg to find out who screwed up. He asked me "how many more people do we need to make this happen". I said one. "one" he exclaimed. I said yes . Your AE who agreed with out checking with the people who have to deliver, have him tell the client we can't make it or... "Or what else can we do?" he asked.
Give us 5 more working days in December I replied. Eventually print production came through. I love those guys.