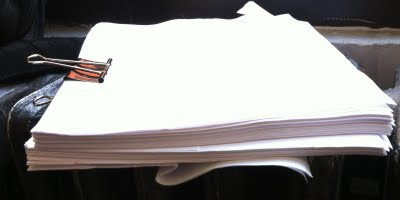 Today my producer and I shipped four television spots and have sent a longform web video to the proper site. The culmination of literally 15 months worth of work.

During those 15 months, I've written, along with some help from a handful of fellow creative colleagues, a lot of scripts.

Above is a picture of them all.

The Roman legions, many centuries ago, developed something called the Testudo formation. In it, legionnaires would interlock their shields and, in so doing, make themselves virtually impervious to enemy slings and arrows.

I suppose this was the forerunner to the modern-day tank or "armored personnel carrier."

Over the past 15 months, I've thought a lot about the Testudo formation. Many times, when you're dealing with client bullshit and agency bullshit, it feels like you are on the receiving end of a lot of missiles. You, or your work, are under siege.

During those times you have to hunker down and look for cover. And even if there's no one to form a Testudo with you, keep moving forward.
Posted by george tannenbaum at 4:00 PM

I think the first one was the best.

You're right. It was.

I know it was