Me and Jackie O. 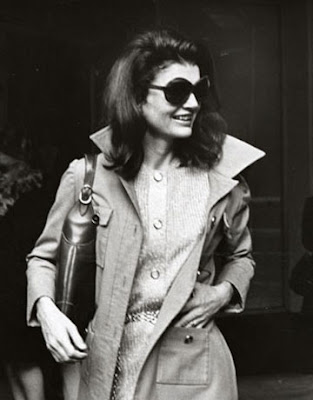 There's a spate of attention of late about Jackie Kennedy Onassis because 8.5 hours of taped interviews between she and Arthur Schlesinger have just been released, 47 years after they were recorded.

Believe it or not, I ran into Jackie one Sunday afternoon in the D'Agostino supermarket on 75th and Lexington, just a few blocks west from my apartment and a few blocks east from hers.

This was about twenty years ago, I was a young father and, of course, buying something we desperately needed to keep my kids from tearing down our apartment. I got to the checkout with my sundries and all at once, behind me pushing a sparsely populated shopping cart was Jackie herself hiding behind a caricature of large sunglasses.

As a chatty person and someone who believes one's personality can be divined according to what's in their shopping cart, I began a conversation with Jackie. If I remember correctly she had some Carr's water crackers, some Martinelli's sparkling apple cider and some Del Monte "fresh cut" creamed corn.

The checkout girl was getting impatient.

At that, we parted.
Posted by george tannenbaum at 10:14 AM

Working late in Philly a call comes in from my copywriter partner. Who is Italian,In NY finishing some spots and in his cups. " (in a hushed voice) I'm in the bar at the Parker Meridian" yes I say wondering what this call is about " you know the tables along the wall?" Yes. "Second table... Jackie O." Really? I responded. " Yesser and I'm going to go over and say hi" Put the bartender on the phone please "Why?" just put him on. "Hello?" the bartender said. I speak into the phon with urgency in my voice Under no circumstances should the guy who handed you the phone be allowed to go to Jackie O's table.
Got it? "Got it"he says. I'm counting on you.man. "I got it."
Thanks.