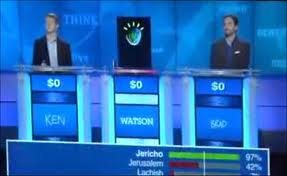 I was out of the country when the TV Game Show "Jeopardy!" featured the IBM super-computer "Watson" as a contestant. However, last night and for the next few nights, ABC Television will re-run the segments. Jeopardy! like most everything else has been severely dumbed-down (Three-letter word for feline; "what is a cat, Alex?") but I'll admit, on those rare evenings I am home by 7PM, I often tune in, as I tuned in last night. http://www-03.ibm.com/innovation/us/watson/?cn=agus_watson-20100712&cm=k&csr=google&cr=jeopardy_watson&ct=USJWK002&S_TACT=USJWK002&ck=jeopardy_watson&cmp=00000&mkwid=sRONsUpeR_15714878373_432n0d3749

The show, the foibles and excellence of the computer, the genius and humility of IBM scientists were all on display. And it was amazing. Of course, I knew the outcome. I knew Watson mopped the floor with its two human contestants. But that's not the point.

The point was the IBM Watson/Jeopardy! shows were probably the best "ads" for a company I had ever seen. And yet, as far as I can tell, the "advertising" effort wasn't cited by a single awards show--or even the recipient of ad-industry buzz.

The IBM Watson/Jeopardy effort wasn't gratuitous and tacked on like so much product placement. It wasn't blatant bombast like so much sports and entertainment sponsorship. It wasn't self-serving and small like one of this year's Cannes Grand Prix winners, "pay with a tweet."

It was a full and astounding product demonstration fully integrated into the surrounding show and a brilliant evocation of IBM's "Smarter Planet" campaign.

The fact that the effort wasn't covered by the trade press, isn't the topic of agency conversation and isn't even noticed by awards shows shows how far the industry has strayed from recognizing and praising work that is genuinely good, business building and important.

We will continue to debate what crappy advertising icon gets on the Walk of Fame. We will extol the virtues of trivial work that's never run. And we ignore what's really happening.
Posted by george tannenbaum at 7:24 PM

it was on tv, not on facebook, there you have it.