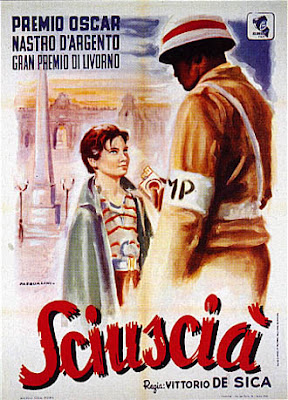 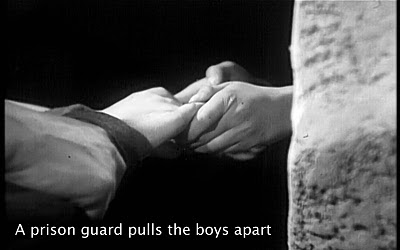 One of my favorite movies of all time is Vittorio De Sica's "The Bicycle Thieves." No director I've ever seen casts and shoots people more realistically and no one tells a small stories about "unimportant people" with such poignancy and subtlety.

Today, work is a little slow and with not much to do I snuck out at lunch and took in De Sica's 1947 movie "Shoeshine."

Here's a "New York Times" recap of the story: "Set in Rome, soon after the American Army had driven out the Germans but before the wider war was over, “Shoeshine” is the story of two boys — the cherubic, towheaded Giuseppe (Rinaldo Smordoni) and the slightly older, more experienced Pasquale (Franco Interlenghi) — who make a living polishing the boots of American soldiers and dabbling in the black market. The boys dream of raising the money to buy a beautiful white stallion that has somehow entered their lives before the film begins (De Sica’s first sacrifice of plausibility to poetry), and in their eagerness allow themselves to serve as innocent dupes in a robbery attempt set up by Giuseppe’s brother....

"Sent to a juvenile prison, the boys are put in separate cells and fall in with a much tougher population, learning the value of keeping their mouths shut. But a guard tricks Pasquale into betraying Giuseppe’s brother by staging a phony beating. (When Pasquale hears what he believes to be his best friend’s screams of pain, he confesses everything he knows.) When Giuseppe learns of Pasquale’s betrayal, the boys’ beautiful friendship is destroyed."

I don't often goof off at work. I seldom duck out and treat myself to a flick.