Franz Hals at the Metropolitan Museum. And death. 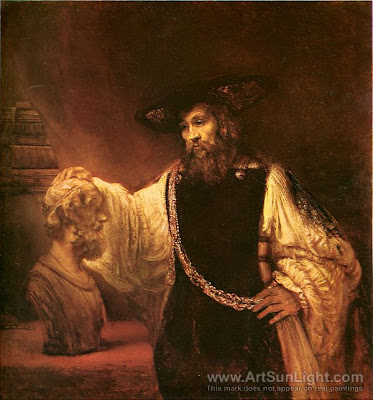 There's a small exhibit of the Dutch Master Franz Hals at the Metropolitan Museum. It runs through October 10th and if you're in the vicinity, you should take a gander.

Hals painted about 350 years ago and though his subjects are accoutered in ruffles and lace, his portraits are surprisingly real and contemporary and evocative. My wife saw Caravaggio in his paintings whereas I saw the brushwork of the Impressionists. And of course, we are both right.

Recently I read something about how painters feared the death of their medium when photography and motion pictures came into being. What's the point of a close representation of a subject when you can have an exact duplicate? Surely someone somewhere declared painting is irrelevant and dead. Another medium bites the dust.

Also in New York this weekend, at the Film Forum, is an all-day Buster Keaton festival with live piano accompaniment. Ah, surely, Keaton is dead. He is silent. He is black and white. Contemporary film makers don't discuss his editing technique. He is past and no more. Though I guarantee the theatres at the Film Forum will be stuffed to the gills with aficionados and there will be more than a few families with young kids in attendance.

My point is that we are quick to pronounce old forms (and old people) dead. We are quick to assume they are superseded by newer and better.

But old doesn't die if it works on an elemental level. If it communicates, breaks through and imparts insight, humor or information in an emotionally moving way.

The photo above is of a painting by Rembrandt that was in the Hals exhibit. It's called "Aristotle Contemplating the Bust of Homer." On the gold belt around Aristotle's waist hangs a pendant with a portrait of Alexander the Great on it. This is a painting, in short, about the imparting of wisdom, and respect, through the ages and across generations.

It's something we could all learn from.

Posted by george tannenbaum at 12:44 PM