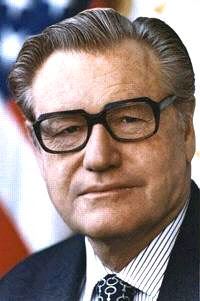 My parents grew up poor, in the poorest immigrant neighborhood in West Philadelphia in the poorest period of America's history, the Great Depression. They also became, if not communists (in the theoretical sense, not the Stalinist/Leninist misinterpretation) then at least extremely left.

My mother even claimed to have worked for Henry Wallace, a former FDR secretary of Agriculture and a Progressive Party nominee for President in 1948, running against the more "status quo" Truman and the more "big business/plutocrat" Thomas E. Dewey. Like most people my mother supported politically, he won 2.4% of the popular vote and no electoral votes at all.

Growing up as they did, the name Rockefeller almost always drew silent movie hisses. John D., the scion of the family was rapacious. It's that simple. He accumulated his vast wealth through nefarious means, on the backs and from the sweat of the little guy. He was, in the words of Teddy Roosevelt, a malefactor of great wealth.

I grew up in sunny, suburban New York in the late 1950s and early 1960s. It was a candy-coated time for America (at least if you were white). But the house I was raised in was a hive of hissing. Rockefeller's grandson, Nelson A. Rockefeller was governor of New York through virtually my entire childhood--from 1959-1973, when he left the office because he was appointed Vice President in the wake of Nixon's and Agnew's resignations. (From 1974-1976 the President and Vice President of the United States were appointed, not elected. So much for our vaunted "democratic" process.)

Nelson Rockefeller, who never reached the goal he was groomed to assume--the presidency--died of a heart attack in 1979, apparently in flagrante delicto with an "aide" Megan Marshack. She was 26 at the time, and the joke running around was that Rockefeller died of bad blood pressure--70 over 26.

In today's political parlance, Nelson A. Rockefeller, a Republican, would be excoriated as a flaming liberal. But in the "little box" I grew up in, he was only slightly better received than Mussolini. He was tarred by his grandfather's petrochemical brush, and because he was to our eyes retrograde at best.

I'm not sure why I'm writing a history lesson this morning. Rockefeller popped into my head as I walked to work and triggered some New York memories. There's no advertising point in this post.
Posted by george tannenbaum at 8:58 AM

And I say thank you for this post. If it was mandatory reading, the world would be better off.