Uncle Slappy and Aunt Sylvie arrived--by plane--from Boca yesterday morning to spend some time with us and to escape the south Florida heat. Unfortunately, the heat and humidity in New York have been every bit as oppressive as what's in Florida. Nevertheless, Slappy and Sylvie are here and we'll make the most of it.

I turned the A/C up in the third bedroom hoping to make the place comfortable for them. The first thing Uncle Slappy did was turn it off.

"You shouldn't, Mr. Big Schott, send all your salary to the Consolidated Edison company. Save some  for your will."

"Uncle Slappy," I explained for about the two-hundredth time, "the A/C is in the building. We don't pay extra for it. You should be comfortable."

"I saw the Con-Ed men digging in the street on Independence Day," Slappy shot back, "with their union making sure they're getting double-triple overtime for the holiday. That's you that's paying them."

The old man wouldn't relent. He refused to turn on the A/C. 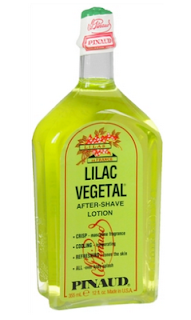 Just before lunch Aunt Sylvie needed to lie down, so Uncle Slappy, my wife and I went for a walk to the CVS drug store on 82nd and 1st, just a few block from my apartment. They sell Pinaud's "Lilac Vegetal" aftershave there, probably the last place in America that does. Slappy's been using the stuff for about 70 years and he stocks up when he is here.

As we were leaving the store, Slappy ran into another alte kocker, Max Blitz, 91, who Uncle Slappy has known since Roosevelt (Franklin, not Teddy) was in office.

"Blitzy," Uncle Slappy started. "What brings you out today?"

Mr. Blitz mumbled something about his wife, Blooma, needing Poligrip. "They have tons of Poligrip in the store," Blitz continued, "But only one of the shelf. You can't keep your teeth in with the Poligrip in the basement."

Slappy nodded knowingly in assent. "The kids. They empty boxes like glaciers. You don't need it in a box, you need it on the shelf."

Mr. Blitz now turned his attention away from Uncle Slappy and myself and onto my wife. He had the twinkle in his eyes of an inveterate flirt.

"You should give me a call," Blitz said. "But if a woman answers, hang up."

Posted by george tannenbaum at 2:30 PM