Breasts in the Tempus Fugit.

I’ve been busy lately, running around town to different agencies and working fairly like a dog. It’s harder I think to do ten little assignments than one big one, and that’s what I’ve been doing. A little bit of this and a little bit of that.

In any event with all this work swirling around in my head, I woke up last night at precisely 2:19 by my wife’s glowing clock. I quickly threw on an old pair of jeans, a sweatshirt and a bona fide pair of canvas sneakers (decidedly not of the $129 ilk) and headed with Whiskey, my 25-month-old golden retriever to my favorite haunt, the Tempus Fugit.

It was a beautiful evening and if Whiskey hadn’t developed a slight limp from playing too vigorously over the weekend, I might have by-passed the Tempus Fugit and just meandered along the river. But out of respect for her sore right front paw, we instead settled into our respective seats at the bar.

The bartender quick as a pixel brought Whiskey a small bowl of cold water and he drew me a Pike’s Ale (the ALE that won for YALE) for the umpteenth time. At the Tempus Fugit, they have for 90 years waged a winning war against warm beer. Their prime weapon in this struggle is the eight-ounce juice glasses in which they serve their amber. In three or four gulps you’re ready for another, without the suds growing tepid or flat on you.

The bartender pulled me Pike’s number two and I sat back in my seat. He began the evening’s disquisition.

“How goes man’s search for meaning in the advertising world?”

I swirled the amber still in my glass.

“There are plenty of ups,” I answered, “accompanied of course by more than the occasional down. In sum, I am not as busy as I'd like to be.”

“I wonder,” he said “if you know the Greek story of Phryne. It occurs to me that it might be relevant in your current situation. 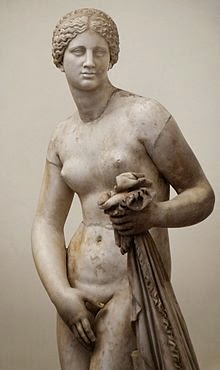 “Illuminate me,” I said darkly.

He took my glass and dipped it into a sink of warm soapy water, then into a basin of clean water. He then took a dishtowel and wiped it clean. He pulled me my third and last Pike’s of the evening.

“She was considered the most beautiful woman in all of Greece. But on this particular day, she was being tried as a courtesan on charges of seduction and impiety.

“They were about to indict her—and probably sentence her to death, impiety was serious in those days. Today, of course, it’s a sitcom.”

“You digress,” I steered.

“Of course. In any event just before she was to be indicted, she tore her dress and displayed her perfectly-formed bosoms. ‘Could you resist these?’ she asked the jury.

“With that, they acquitted her.”

“They don’t teach you that in law school.”

“You may be having a hard time right now. Work is a little slow. But your special attributes—your way of taking mush and making it interesting, your analogous perfect breast will win out.”

I started to pay.

Posted by george tannenbaum at 11:02 AM