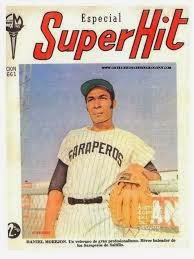 Back in 1975 when I played for the Saraperos de Santillo (the Santillo Sarape Makers) of the Mexican Baseball League, our top pitcher was Enrique "Salsa" Colon. Colon was a short, round man but had been, in his prime, a powerful hurler with a 90+ mile per hour fastball.

Now, Colon was approaching 50 and on the mound he was forced to rely more on guile than on "stuff." In fact, though we had no radar guns in those days, I'd have been shocked if Colon's fastball reached even 70 miles per hour. He had no more speed than a mediocre high school pitcher.

That said, Colon won and won and won, whiffing batters, catching them looking, beguiling them with an array of oddly thrown pitches that most guys could do little more than wave at.

Colon's best pitch was his patented "salsa ball." In the dugout between innings, he'd slater salsa on his uniform, in his back pocket, in the top of his sanitary hose, in his hair. His uniform in fact looked like the table cloth of a neighborhood Italian restaurant after all-you-can-eat spaghetti night.

Colon would dab a baseball with salsa and he could make it dance like Isadora Duncan in a centrifuge. He even got to the point where he'd alternate between a spicy green salsa for a down pitch and a mild red salsa for an up pitch. He was to salsa what Einstein was to physics. Colon had figured out the secrets of the universe.

What's more, as be-stained and besmirched as Colon's uniform was, he figured out how to conceal the salsa once it was on the ball he was throwing. While our opposition would protest that Colon was hurling a doctored ball, no umpire could ever catch him in the act. And his act was winning him game after game.

One night we were playing the best team in the league, the Diablos Rojos del Mexico (the Mexico City Red Devils) and Colon was on the mound. He started them off with pitches loaded with red salsa, but the Diablos quickly had Colon's number. They lashed hit after hit.

After three innings we were already down 7-2, so Colon changed tactics. He switched to his green salsa breaker. Again, maybe they were stealing signs or something, the Diablos drew a bead on Colon's pitches. They had knocked Colon's salsa pitches for 11 runs, but somehow the Saraperos were hitting that day too. I myself went 4 for 7 with two doubles.

Colon wanted to win. This game meant something to him.  He decided to pull out the stops.

A baseball wrapped in a soft tortilla covering. Moistened and pressed almost invisibly into the very ball it is wrapping.

The Saraperos found themselves in the bottom of the ninth, somehow, magically perhaps, tied. It is 12-12.  Colon wraps, he winds-up, he throws.

Again, the wrap, the wind-up, the pitch.

Colon again pulls a tortilla out of his pants, deftly hiding the action from all eyes. He massages the unleavened flour cake onto the ball, he juggles the ball in his naked hand, weighing it, assessing it. This will be the pitch he says, and off it goes.

With a single swing, the Diablos batsman rips the tortilla cover off the ball. The ball hurtles higher and higher, landing finally in the left-center stands. A homerun.

Colon, salsa ball, tortilla ball and twenty years of guile, has lost the game. Worse, he lost his love for the game. He quit the team that night.

I've been around baseball my whole life. My father took me to see his beloved Phillies in the Polo Grounds when I was just four. And I've seen many a great pitching effort.

But I've never seen a man put more into a pitch than Enrique "Salsa" Colon.


Posted by george tannenbaum at 11:38 AM