When my old man was a young man he grew up in what we would today call a ghetto. For blocks in every direction from 1056 S 51st Street, the rowhouses were filled with Jews.

Even when my old man enrolled in Temple, the first in his Yiddish speaking family to go to college, he was safe among fellow Jews. 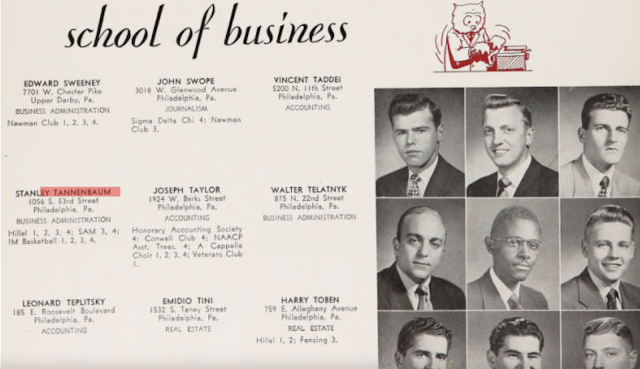 He met his wife, my old lady, just blocks away. And his three best friends, all named Herb, were also just a yarmulke's throw distant.
My father burned with ambition, however. These were the days of the melting pot. The American Dream was being dreamt in vivid color. And Stan set his steely blue eyes on the center of the Dream Machine, New York's Madison Avenue.
These were pre-Doyle Dane Bernbach days. And Madison Avenue was still as WASP-y as mayonnaise. But eventually, Stan landed a job with a snooty ad agency called Kenyon & Eckhardt.
He packed his 1949 Studebaker to the gills with my old lady and everything they owned and moved from S. 51st Street in Philadelphia to plowed over farmland out in Queens that some developer had the wisdom to call Fresh Meadows.
I'm not sure how fresh it was and I know my father didn't know what a meadow was any more than he'd know what to do with Holy Water. But there he was.
My old man told me the story this way:
"We moved just before Christmas. I had never seen anything like it before. It seemed that every apartment in our garden apartment complex had some huge tinsel conifer radioactive in their living room.
"That's ok," I said, "the Goyim do what Goyim do." And I let it go at that.
"But then one day--it must have been a week or so after Christmas and on a Saturday or Sunday, I start seeing people driving around the neighborhood with their trees on the roofs of their cars. I had never seen anything like it.
"I rushed home and told your mother. 'Maybe it's a thing they do,' she said 'like a college tie or brass buttons on a blue blazer. It's probably just how the Goyim show off.'"
My father was having none of that. He was already feeling slighted as the only Jew at his agency. And he didn't much like the feeling of people lording things over him. He was conscious that he had grown up poor. His college was a commuter one. His Studebaker was a couple of years too old.  Maybe his suits were on the shiny side. He had more than a bit of a chip on his shoulder.
"That night," my old man continued, "I got some of the string your mother had saved from the bakery. She kept it in a big ball, because why should you throw out perfectly good string, and I got out your mother's brass menorah that was coated with the wax of a hundred Chanukahs. I tied it to the roof of my Studebaker and rode all over Queens with it, flashing my lights and honking my horn at the Gentiles every time I saw someone carting around their tree.
"It wasn't until months later that I realized all these people were doing nothing but, Christmas being over, taking their Christmas trees to the dump."
I waited for a few minutes for some sort of resolution. Maybe a bit of Pirkei Avote-- the Wisdom of the Fathers. He sat for a long while, rolling his cigar between his fingers like George Burns. And then he ended his story.
"George," he said, "be careful out there."
Posted by george tannenbaum at 7:02 AM