One of the things no one talks about in the Holding Company-ruined advertising industry is the evaporation of belief.

The systemic evaporation of belief.

For as long as I've been in the industry, I've been retained on an account, usually the largest account in the agency, or the second largest. I never had to worry about being billable or hunting around for my next assignment. In the serfdom-influenced-language of the modern economy, I was "owned" by clients.

Yes. We use language like that. And you don't have to be Noam Chomsky to have a philologic field day with that nomenclatura.

What being owned, however, allowed a creative was simple. Belief.

You also, over time, enjoyed a certain amount of intimacy with the client. You spent long fluorescent nights with them haggling over semantics, commas and type size. You frame-fucked together. You became part of a team.

So whether I was working on donut-and-coffee chain, a vaunted German automaker, a retirement company, a large technology company (or two) or an aerospace manufacturer in dire trouble due to a tainted culture that led to two plane crashes and over 300 deaths, you learned, you lived and yes, you grew to love elements of the companies you were charged with working on.

This is not brainwashing.

This is not propaganda.

It's different. It's learning as much you can about a company, weighing their good and bad and finding a way to believe.

We fall down as a society when we believe people and companies are idealizable. Or perfect. Or heroic.

No. The only heroes are those without heroes.

Positing that, you can believe in a company, or an agency, or a spouse, or even a country, without believing it is wholly good, wholly noble, wholly without sin.

When you believe that despite missteps, mistakes and malfeasance a company does more good than bad, you can create good ads for them. Because now you understand them. Their core. Their ethos.

In my new career running GeorgeCo., a Delaware Company, LLC., I am most-often called on to help companies figure out who they are and what they do. My particular skill, or peculiar skill, is that I can render these definitions in memorable--even epigrammatic ways. Ways that allow the company to know who they are. And to march forward with a unified mission.

Maybe I'm just too old-fashioned for a world that seems to be ever-galloping into a new Dark Ages. But most companies and clients and products are ill-defined.

Not only do they themselves not know what their mission is, people don't either. They don't know their reason for being, what they do or why.

In the impecunious holding company cosmos where ad agencies and clients are run by people who are better at accountancy and processing than humanity and empathy, belief is discounted if not lost.

Over 50 years ago, Bob Levenson wrote this ad for Doyle Dane Bernbach and, really, the entire advertising industry. Today, oppressed by "razor-thin margins" and phalanxes of cost-consultants, our very way of working assures that the ad industry will die.

We no longer believe. Or allow ourselves the time to find belief in what we do. That's a prescription for death.

Or as Arthur Miller wrote three-quarters of a century ago, in a poem about knowing the price of everything and the value of nothing:

When a man admits failure he becomes a pedestrian.Brotherhood is when two men have the same mother.Sacrifice is a car sold at a ridiculous price.Society is when people listen to classical music;or a Savings & Loan.Law is order, Justice a decent return on money.Progress is anything turning on and off by itself.Beauty is teeth, deep skill, and the willingness.Freedom is the right to live among your own kind.A philosophy is a keen sense of land valuesand the patience to wait.War is peace waged by other means .They know they are the Future.They are exceedingly well-armed. 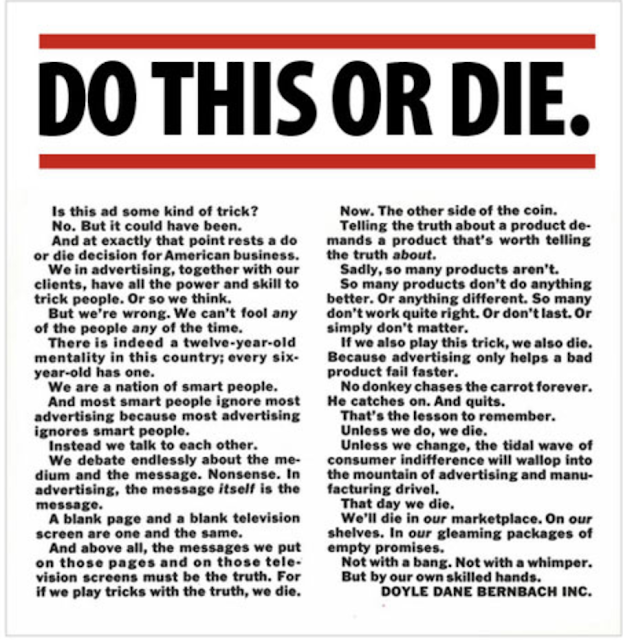