F-You. With Fellini and Frost.

There's something about doing things year after year that gives me the hope of a placid continuity in a world that seems to be on the brink of spinning off its axis.
According to many, the Sixth Extinction is here--and as someone who's read a fair bit about the first five--it's safe to say that as a species on a dying planet, we have more to worry about than what Halloween candy to buy, who's wearing what at whatever talentless awards show or some outrage from some comedian about something that will be of no consequence two-sneezes from now.
Last Saturday, however, my wife woke up with an apple-cheeked glow on her face and I knew what that meant. It was time for our annual sojourn into the country. Time to visit one of America's few remaining farms and to pick more apples than is remotely reasonable.
My entire family loves apples, however. And since my early 20s, blessed with the manual dexterity of a Philadelphia tailor or a Rififi safe-cracker, I've once-or-twice a year peeled and sliced dozens of pounds of apples then made container after container of the most-sumptuous apple-sauce you can imagine. My wife, with a coffin-sized freezer in our rickety garage, keeps it all year. She gives it to people she visits, sends it to our faraway daughters and even sneaks it frozen past the TSA who often have to be convinced it's not some sort of plastic explosive and she's not a page out of The Battle for Algiers.
It's the passing of time, however and the events that mark that passage that this post is about. Apple time means something. It means the winter holidays are coming, the year's end is near and it means hours in the kitchen steaming up the windows with an incipient apple-infused torpor.
When I was a boy, a city-bound boy, I'd anticipate the coming of the seasons by the plastic menorahs that would pop up in shop windows along Jewish Broadway, appearing just before Thanksgiving. They were as tilted as cones after a new driver's test--placed willy-nilly in the windows of drug stores, hardware stores and drycleaners always hewing one way or another, a-kilter to an old flatiron or some gift-set of monkey wrenches.
As Jewish Broadway's Jewish shop owners retired their shops were bought by the next generation, cigarette smoking Asian men and women who spoke more Yiddish than they did English, spitting along the way.

Unsure about the neighborhoods' holidays, as we are unsure about theirs, those same plastic menorahs--never with the right number of candles lit, would begin to pop-up like crocuses earlier and earlier. Conflating, I suppose "Jewish Rush Week," (Rosh Hashana and Yom Kippur) with Hannukah, the candelabra would be up and running around the time the baseball season wound into the playoffs. 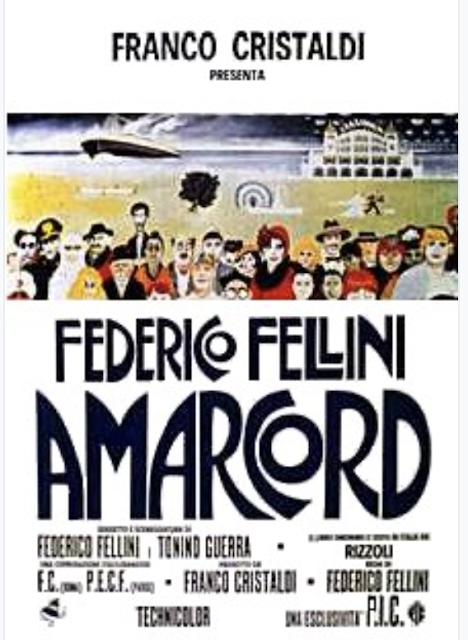 The best recounting of the passage of time--of ephemeral and eternal--I viewed as a 16-year-old boy when my friends and I decided to go see, instead of a summer blockbuster, Fellini's "Amacord." It was playing at the local art house bijou--and it was really the first movie I ever saw without a discernible plot.
The movie opens with a harbinger of spring. Small white spores are wafting through the air. Children are running after them, chasing them. Windows are thrown open. Boys are chasing girls. The white flows waft.
The movie goes on with a thousand scenes. Sad. Funny. Sadly funny. Funnily sad. And more.
At the end, my friends and I not really knowing what we had watched, the white spores came again.

I said aloud, "A year in Italy at the rise of Mussolini's Fascism."
Oh. My. God.
A canvas of hope. Despair. Laughter. Lust. Mischief. Hate. Death. Life. Birth. Fucking. Eating. Pissing and more.
The movie so moved me, that forty years after first seeing it, I drove in an Alfa Romeo 200 miles out of my way in Italy to visit Fellini's home-town of Rimini, because I needed to see it and breathe the same air he might have breathed.

I don't know if the rise of Amerikan Fascism will be chronicled as well as the rise of Italy's. I know, Amerika's descent will be deeper, darker, crueler and more deadly. And won't be set to the music of Nino Rota--some of the best music ever recorded for the movies.
The apples are picked now. A good 75 pounds of them. They take up every bowl and container my wife owns and our house smells like a symphony. Soon, I will be dragged away from this Apple--my MacBook Pro, and the weekend assignments I have to do and go to work on Macouns, Jonah Golds, Empires, Pink Ladies and more.
As we think about the passage and the permanence, I leave you, as I do pretty much every year around this time, with this from Mr. Frost.

BY ROBERT FROST
My long two-pointed ladder's sticking through a tree
Toward heaven still,
And there's a barrel that I didn't fill
Beside it, and there may be two or three
Apples I didn't pick upon some bough.
But I am done with apple-picking now.
Essence of winter sleep is on the night,
The scent of apples: I am drowsing off.
I cannot rub the strangeness from my sight
I got from looking through a pane of glass
I skimmed this morning from the drinking trough
And held against the world of hoary grass.
It melted, and I let it fall and break.
But I was well
Upon my way to sleep before it fell,
And I could tell
What form my dreaming was about to take.
Magnified apples appear and disappear,
Stem end and blossom end,
And every fleck of russet showing clear.
My instep arch not only keeps the ache,
It keeps the pressure of a ladder-round.
I feel the ladder sway as the boughs bend.
And I keep hearing from the cellar bin
The rumbling sound
Of load on load of apples coming in.
For I have had too much
Of apple-picking: I am overtired
Of the great harvest I myself desired.
There were ten thousand thousand fruit to touch,
Cherish in hand, lift down, and not let fall.
For all
That struck the earth,
No matter if not bruised or spiked with stubble,
Went surely to the cider-apple heap
As of no worth.
One can see what will trouble
This sleep of mine, whatever sleep it is.
Were he not gone,
The woodchuck could say whether it's like his
Long sleep, as I describe its coming on,
Or just some human sleep.

By the way--if you ever have a chance to hear Frost read Frost,

put down your phone and listen. I promise it will do more for your soul than the status meeting you'll be late for. Actually, listen twice through--you'll get eight times the pleasure.