Lately, like for the last 63 years, I have been burning the candle at both ends. The American poet, Edna St. Vincent Millay said it best. (By the way, her middle name is St. Vincent because she was born in that hospital in Greenwich Village. Just call me George Yonkers Hospital Tannenbaum.)

My candle burns at both ends;    It will not last the night;But ah, my foes, and oh, my friends—    It gives a lovely light!

I've been talking to a new old friend of late, the surpassing copywriter and Executive Creative Director, Debra Fried. Debra wrote this wonderful post for this blog not long ago. If you didn't read it first time around, do yourself a favor and read it now. Also, follow Debra on Medium. It's well-done.

In any event, I said something to Debra the other day--a throw-away line that she picked up on. I'm giving us both credit for it. I did the easy part--I wrote it. Debra did the hard part--she noticed it.

The line goes like this: "It was only when I left the agency world that I got my agency back."

I started thinking about my two-years since I was kicked to the curb by an agency I was making money for--presumably due to the white hair around my temples and the convocation of avoirdupois around my mid-section. I can reach that conclusion because only 1/100 WPP employees is over 60. Around the world, 1/7 people are over 60. Go DIVERSITY!

(I'll write an homage to Millay's doggerel above with more than a soupcon of Ogden Nash added.)

If you live today
Anywhere in the universe,
You must quickly learn,
To use the word diverse.

Use it here. Say it there.
Whether you're feeling bad or feeling great.
Use it in writing, use it in speech.
Just don't forget to discriminate.

It doesn't matter,
Whiskey or beer,
Say there or say it here.
Just make sure you're insincere.

Right now, I have about a dozen clients with multi-billion dollar marketcaps. I am working on building a couple of teaching programs. And with some friends, I am working on a book on advertising.

I am working harder than I ever have. With greater productivity, happier clients, and better work than I've ever done as the output. I'm also exercising and reading more.

Dr. Lewis, are you reading this? I'm happier, too.

During one of my long, wayward walks, I started thinking about this productivity phenomenon. Why do I suddenly have my agency back? What accounts for my prodigious productivity. Here's a list that might begin to make sense of it all.

1. I no longer have a coterie of jealous supervisors and so-called colleagues who spend parts of their day keeping me down because they're afraid of me getting ahead.

2. I no longer have to sell my work 61 times internally to people who are not concentrating or are looking at their phones or wondering how they can make my thinking theirs.

3. I no longer have to spend weeks at a time bringing people along because they were expecting one thing and I gave them something else.

4. I no longer have to sit in six hours of meetings a day so the people presiding over the meeting can feel important--showing up late to show you what's what. (Read John Kenneth Galbraith's thoughts on meetings here.)

5. I no longer am forced to watch stupid compliance videos to satisfy corporate lawyers. I must have watched 20 anti-bribery videos over the years. But WPP, not me, was sued by the Securities Exchange Commission for bribery and was forced to pay $19 million in fines--though they admitted no guilt.

6. I no longer get a badly-written all-caps emails yelling at me for being nine-minutes late on timesheets.

7. I no longer have to listen to the insane jargon that spews out Vesuvius-like from mindless doyens of corporate tomfoolery under the guise of "we can see the future." 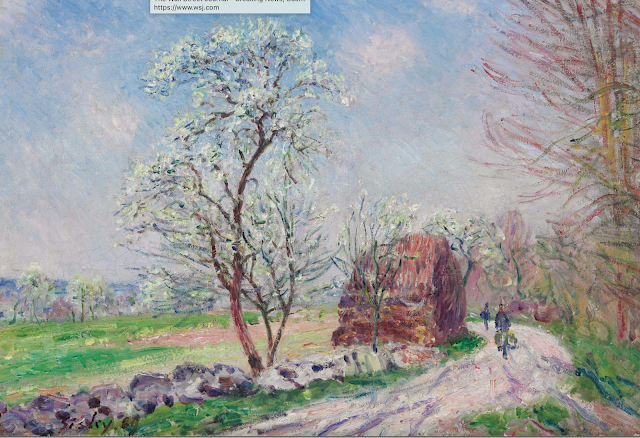 8. I no longer have to deal with 17 rounds of client revisions and track-changes in more colors than your average Alfred Sisley painting.

9. I no longer have to deal with the petty squabbles inherent in social organizations.

10. I no longer have to deal with the turf wars that take place when an agency is a zero-sum game--that is, a place where when someone gets, someone else loses.

11. I no longer worry about being fired because I'm big and old. White and male. Outspoken and funny.

I could easily go on--adding 40 or 50 more items to this list--all before my Eggos pop-up from the toaster. I'd bet a lot of you already have a pain or two in your neck from nodding in agreement with the above.

So that's enough for now.

Besides I have work to do.

Posted by george tannenbaum at 6:00 AM