Many years and many pounds ago, I was a decent marathoner. In those days, the training regimen for marathoners was acronymed "LSD," long, slow distance.

About twice a month, my running friends and I would do a 15, 18 or 20 mile run, prelude to running the marathon. We were a good bunch of friends. People you could count on for encouragement when you felt like shit, or a couple jokes along the way, or a good story or conversation.

This group included my wife, Laura, the best runner among us, Judge Robert Haft, a New York Supreme Court judge and an attorney named Harvey Fishbein. Other people moved in and out of the group through the training season, but this was the core.

The other thing about this group was this: they were all as reliable as granite. There were no excuses like, "it's too hot to run today." And we were all good about time. No meeting at 8AM and showing up at 8:15. Those are pretty much the things that help a group cohere. I suppose today we'd call that culture.

At one part of our runs--usually at about 18 miles or so, a road into Central Park from Central Park West split into two. You could go south or you could go north. In between those divergent roads, there was a pizza slice of dirty grass or grassy dirt.

Harvey Fishbein created, enacted and enforced this rule. No matter which way you were going, or how tired you were, there was to be no cutting of the triangle. Over time, like its more well-known geometric brethren out near Bermuda, this little plot-a not a lot of land, became known as the Fishbein Triangle. 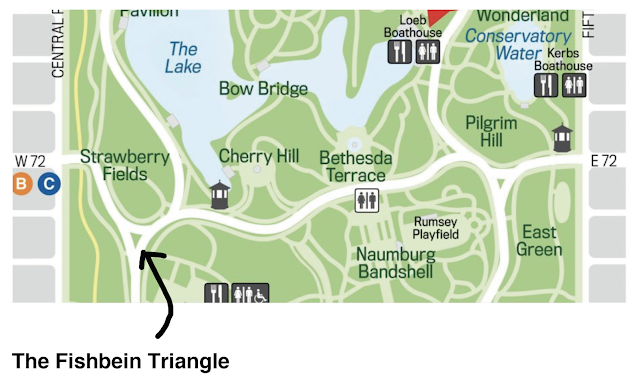 There was to be no cutting whatsoever of the Fishbein Triangle. This was an absolute. A matter of trust and faith.

Not too long ago, I got off the phone with the older of my two precocious daughters. There's always some mishegas happening at work--especially if you're ambitious, intelligent and hardworking (ie threatening) and that mishegas is even more egregious if you're a woman.

I reminded my daughter of a concept I call the three types of loyalty.

The first is loyalty to the place that employs you. But that loyalty is not blind. It must allow you the second type of loyalty. Your loyalty to your craft. Are you doing work you like? Are you learning? Are you being challenged? The final type of loyalty is often the toughest one to reckon with and remember. It's loyalty to self. Are you getting as well as giving? Are you being rewarded? Well-treated for the first two loyalties. Without all three loyalties, you have a malignancy. A malignant loyalty of the type that 45th presidents and other pomposities enjoy.

You can get away with it, too.

Nine times out of ten, you can skirt by phoning it in.

For me, that's where the Fishbein Triangle comes in. Or that old-fashioned definition of integrity: doing the right thing even when nobody's looking.

About an hour ago I turned to my wife, and said, "I don't have a post for tomorrow."

She said, "Write about the Fishbein Triangle. Every time we go for our morning exercise, I see you paying homage to the Triangle. Completing the circuit. Tacking on an extra five yards or ten. It's giving the client ten ads or 18 instead of the three they're asking for. It's giving more and doing more. Write about that."

I suppose I could also call it the Laura Triangle.

But Harvey would kick my ass.