As I round out my 41st year of getting paid for typing, I find myself sometimes thinking of icebergs. Not because of any Anthropocene bomb cyclone polar vortex up here on the Gingham Coast but because of the way the ad industry is currently constructed and constricted.

The industry does a great job hiring people who are enormously creative. Browse people's portfolio sites and you'll see art directors who can paint or sculpt. You'll see writers who have had fiction published in the hoitiest of toity magazines. You'll have planners who do standup and account people who are writing deep, well-researched histories on obscure topics that probably shouldn't be obscure.

Anyone of these avocations are a rabbit hole you could find yourself digging through for hours upon hours.

Yet for whatever reason, as an industry, we seem to want to hide the personalities of our personnel from client work. We see only the compliant tip. Not the whole person.

We say to those writers who regularly have worked published in prestigious magazines: "No one reads anymore."

We say to those art directors who can paint and express with paint, "We only have the budget for stock."

We say to those planners who can make people think and laugh that they should stick to their keynotes.

We say to those account people that they're business people and they should subsume their humanity rather than reveal it.

We have forgotten one of the foundational precepts of our industry. "People read what interests them and sometimes it's an ad."

We have forgotten "interesting." For bullet-points.

We're all of us under these strictures and structures subsuming our humanity and our selves. We're hiding our personal beliefs and expressions in the restrictive confines of a "tone of voice," or some pompous set of Teutonic "brand guidelines."

Heaven forfend, we tell a joke.

We might look at work we like--like just about everything Ryan Reynolds does--and we wonder. How does he do it? How is he so fresh, so irreverent, so breakthrough?

We can say the same thing about this commercial from 2018, aka a thousand years ago.

Or this dopey little thing from Mint Mobile.
My guess is whoever was behind these spots kicked the 24 lines of single-spaced mandatories in the ass. They ignored 98% of the seven-page brief and maybe focused on one-half of one underscored sentence somewhere in that 4,000-word doc. Maybe they used a document like this: 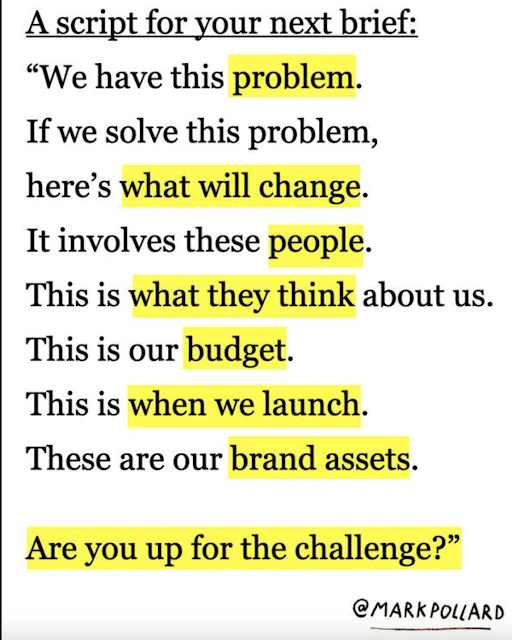 Maybe someone was wise enough to say, let's ask Jill to write this. Jill's funny as shit.

Let's not bog this crap down with must-haves and have-to-haves and focus-group pleasings and nine weeks of tweakification in a vain-glorious writers' room which isn't really a writers' room it's a second-guessers'-room.

Bev's a storyteller, let's get her to do this.

My point, as inchoate as I am today, is simple. We keep hiring people of depth and then make them shallow.

We keep saying that's esoteric, or sophisticated, or no one will get that. Or that's too personal. Or too wicked. Or too twee. Or too arty.

A friend just sent me a story--a funny story--he had published in McSweeney's.  Another friend sent me three moving, funny stories about growing old in a young person's game. And another friend told me about a vaunted agency that loved the paintings she's posted on her site.

What the calculus-caluculators in management have never calculated--and they get farther and farther away from understanding it every day, is that only people can create work that moves people. They think machines can do it. They want machines to do it. It will be faster and cheaper and less of a pain in the arse.

We have people with souls--but a soul in advertising will only get you in trouble.

About 65 years ago, an agency then called Young and Rubicam, before it was bought, sold, sliced, arbitraged, derivatized, merged, unmerged, bought back and re-re-merged, ran this ad.

It was about most of the things our industry has forgotten almost wholly.  Blow the jpeg up and read the copy. The resolution is good enough.

It will remind you of a few salient points.

With human emotions and feelings that need to be moved if we are to be moved.

Those are human things.

As the old song goes, "Try a little tenderness." 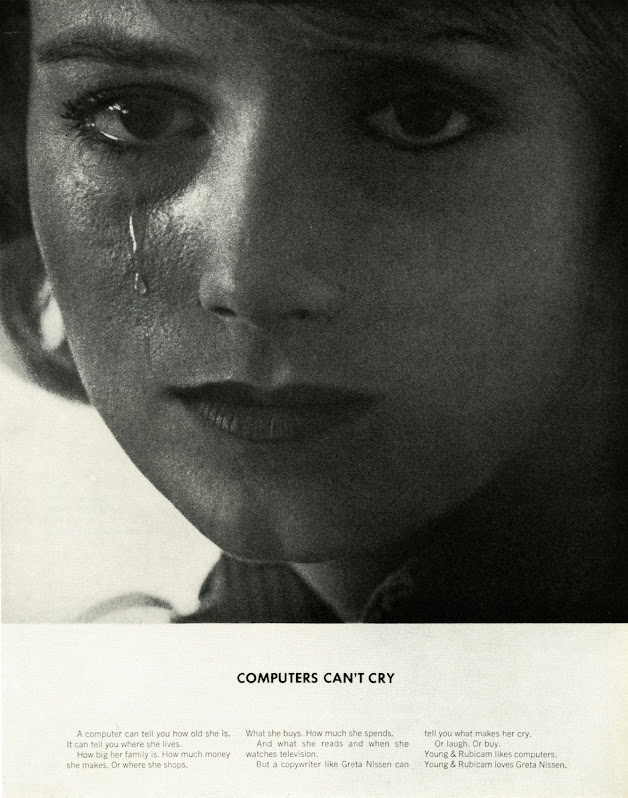