The Persistence of Memory.

I wrote something last week about the old Carl Ally agency, or its renamed successor agency, Ally & Gargano. When I was at the later permutation from 1990 to 1995, I stumbled upon a sheet of paper with the agency mission typed on it in that ancient courier typeface. I liked it and quickly memorized it.

Soon after I posted that, I got a note from the great Ron Berger, one of the most-storied of Ally's copywriters, who later founded an agency, Messner Berger Vetere Carey Schetterer that eventually turned into EuroRSCG and now Havas.

I asked Ron if I could repost our conversation, and he kindly said yes. I hope you learn as much from Ron as I did. 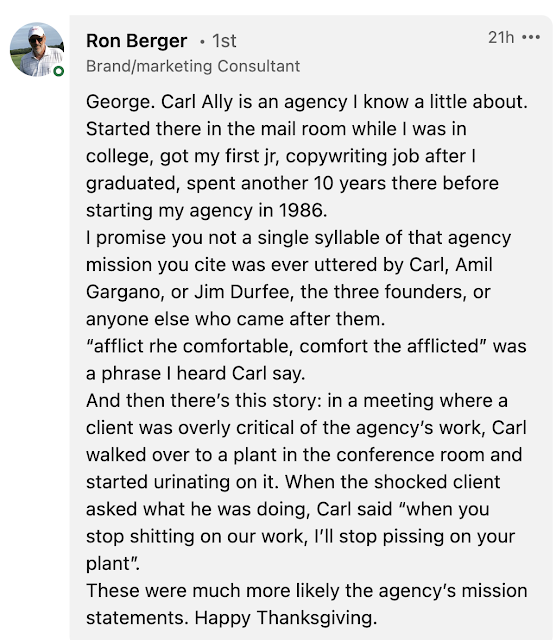 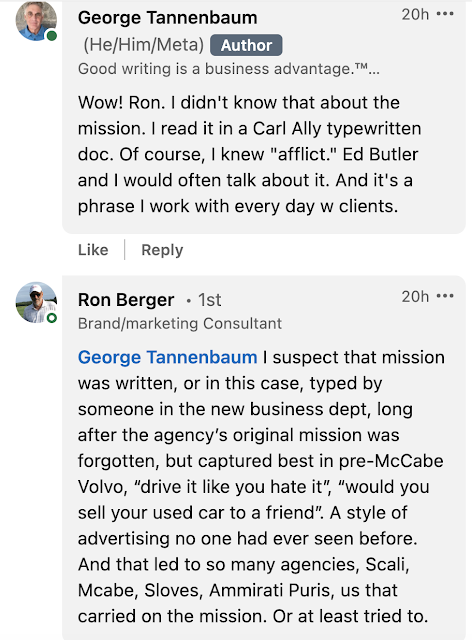 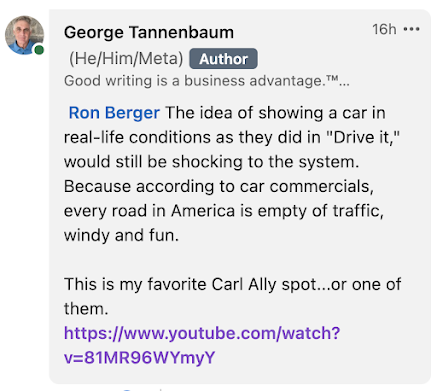 And here, at long last is the point of today's post. I realize I could be wrong in that I am both a student and a practitioner of advertising, so I pay, in all likelihood undue attention to advertising.
I wrote back to Ron that his Fiat ad (which I searched for and couldn't find) and the work that Ammirati & Puris did for BMW "The Ultimate Driving Machine," are still etched in my brain--50 or more years after they originally ran.
That, in brief, is the power of a powerful thought. As Rob Schwartz, CEO of the TBWA Group in New York once said to me, the most valuable real estate in the world is owning a piece of someone's brain.
Like "four score and seven years ago." Like Shakespeare's "St. Crispin's speech, "We few, we happy few, we band of brothers;
For he to-day that sheds his blood with me/ Shall be my brother;..." Like "I have a dream." Like "Ask not..." Like "I can't get no..." And so on.
While the mania of our industry seems to impel us to "cultural relevance," whatever that means, culture in today's world lasts about as long as a fart in a windstorm.
However, the real power of communications lays in creating a seminal summary thought that captures a spirit and, if this isn't too pompous, an ethos we aspire to.
If I had a dime for every client who's said to me, "I need something like IBM's "Smarter Planet," (which hasn't been used for almost ten years," or Dove's "Real Beauty," or Apple's "Think Different," which might be thirty-year's dormant, I'd have at least fifty cents now.
My point is simple.
The real power of advertising is that, at its best, it can be more than ephemeral trend-surfing. It can be a deep, well-carved permanent installation like the Elgin Marbles. It can weather brand storms and stormy CMOs who blow--worse than a storm--hot and cold. The real power of advertising, when it is good and innate and truly true to the brand and helps center it as well, is that it is enduring. It can lead and guide.
But that can't happen--it seldom happens now--because clients change CMOs and brand-definitions as often as frat houses change rolls of toilet paper after their semi-monthly "Bean Burrito Bash."
My two cents:
Fuck culture.
Find truth.
Find a belief that is implicit to a brand. Express it artfully and memorably. And have the courage of your convictions that this expression is not a two-year thought or a ten-year thought. But is something to build a dream, and a fortune, on.
Advertising can be more than just an interruption. It can be more than just a sales-enabler. More than just an announcement of another cosmic Toyotathon.
It can be the foundation of all actions a company and a brand takes. It can guide workers, management, and consumers. Much like the foundation myths of America or the United Kingdom or any religion or any other enduring polity have--at least somewhat--guided them.
We need to stop thinking of advertising as expensive, trend-chasing ephemera. When it is more. It can be a cost-effective and life-saving lighthouse.

Posted by george tannenbaum at 5:20 AM