When I was a boy, there was little I enjoyed more than a really good apple.

Though I've always been partial to a nice crisp Macoun, the truth is I'm not a snob about these things. Many people look down on Red Delicious. They're like the 'flyover' states of apples. But I think their name suits them. They're red. And delicious.

They might not have the taste complexity of a Jonah Gold, a hearty Winesap, a tart Granny Smith or even a Macintosh, but they're sweet and juicy and yes, delicious. It's stupid to get all precious about things like apples. Just enjoy them as they fall.

That said, one day I was buying apples and saw in those apples the death of all civilization.

To each apple I bought there was affixed a small white sticker with some inscrutable price-or-type-related runes. It struck me at that moment that any society so blithe in disfiguring nature, so complicit in sullying the perfection of an apple, is really beyond redemption.

For almost 50 years, I've kept this sentiment to myself. I've told no one about it, not even my wife, until today. People already have a hard time with my idiosyncracies and judgments without knowing how hardboiled they are. When you're as stiff-necked as I am it's better to keep certain aspects of your stiff-neckedness to yourself. Otherwise you could find yourself in a locked ward someplace in the country. Cue chirping birds.

Until early this morning, I've always regarded stickers on apples as the nadir of humanity.

Until early this morning.

Then, in short order, I saw three things online that lowered my tolerance and evoked a damp, drizzly November in my soul. These three things were all from different sources, but to my eyes, all related.

The first was an ad for the University of Pennsylvania who announced that they now have an HR-academy. I don't really understand this. Good HR should revolve around treating people with kindness, respect and honesty. Visit people at their desk when you need to see them; don't have them come to you. Always send out a note announcing new hires the day they're hired--not later. Praise people for jobs well done, both with words and with money. In other words, be Human. It's in your name, after all.

Instead, I saw this: 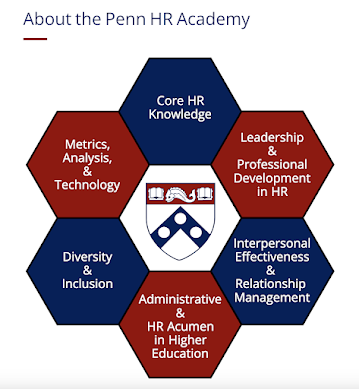 The second came from an agency I won't name and that I've never heard of. Here's a list they have on their site of their "perks." Perks are supposed to be extras. To me this list seems list the barest minimum of decency--including one-whopping-meetingless hour a day.

Seriously, if you have to remark on giving employees a one-hour mental health break every day, it's like the engineers managing a nuclear power plant saying that between 11AM and 12PM every day they'll release no strontium-90. 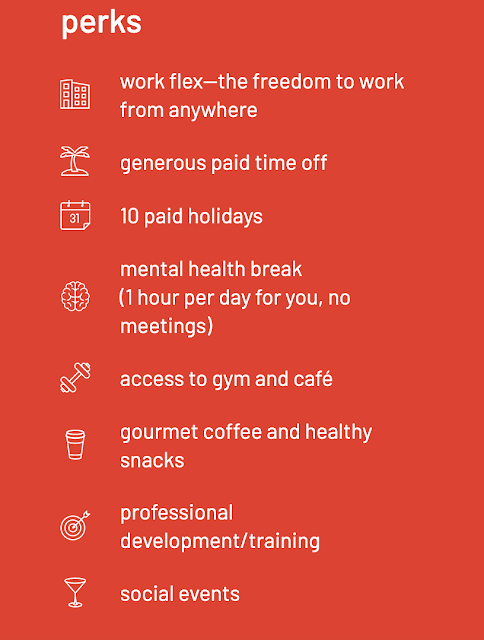 Finally, I heard from a friend who, after ten years of working for 30-hours-a-week at Disney was recently let go via Zoom. (They kept him working as a freelance part-timer so they didn't have to give him either benefits or severance when they fired him.) The background on the Zoom call was stolen by the Disney person from the old Warner Brothers' cartoons. It said, "That's all folks!"

All of a sudden, putting stickers on apples seems positively quaint. 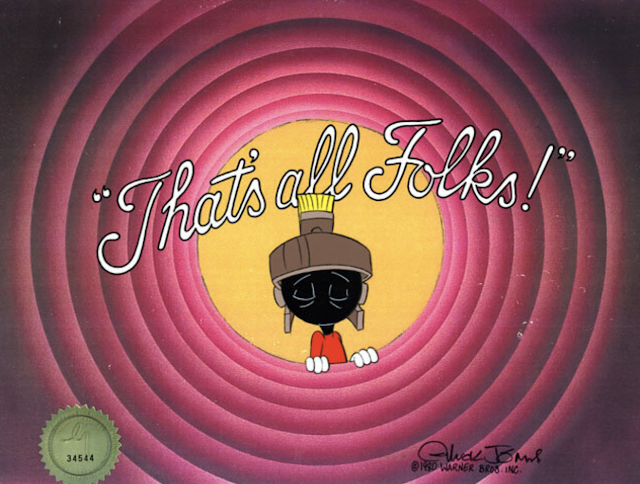 Posted by george tannenbaum at 8:31 AM