One of the reasons I so much love New York is that New York has a sense of humor like no place I have ever been. New York is a fast-paced city and to get along here you have to be a little quicker than other people. Quick on your feet. Quick-witted. Quick to shut up, too. 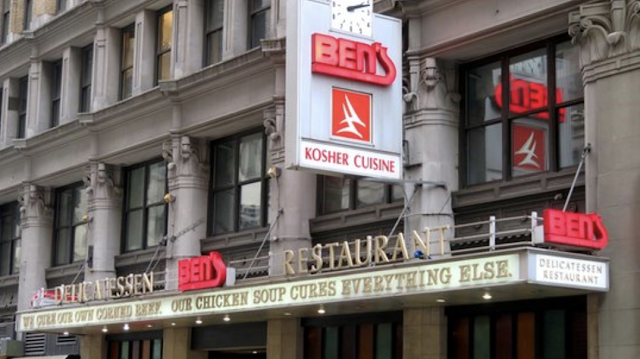 A couple months ago I had lunch with a friend in one of the last Jewish delis in what used to be the garment district, Ben's. Ben's has a sign out front that says, "We cure our own corned beef. Our chicken soup cures everything else."

Inside the cavernous restaurant, there's a joke written out that circles virtually the entire restaurant. It tells the story of a Chinese waiter who speaks perfect Yiddish. A customer is amazed and asks the manager how this feat came about. And the manager answers, "quiet, he thinks I'm teaching him English."

In any event, my cellphone had fallen in a gap between the wooden booth and the wall. I tried everything and couldn't reach it. The manager came over. He tried with a long stainless spatula. He couldn't get my cellphone either. After a while, an old Black waiter came over. He figured out how to move the bench. In a moment he had retrieved my cellphone.

I made a crack of course about Jews being mechanically unable. The Black waiter heard that and when he handed my phone back to me, he looked me dead in the eye. "I knew you'd get it," I said. He paused a perfect Borscht Belt beat and then said "Shalom." Ten-dollar tip. Earned.

On Wednesday I had another such incident. I had a client meeting in Midtown and was trying to get through security at their building. I checked in with an older gentleman at the front desk.

Again, Borscht Belt timing. "Not today you're not." Beat beat. "They're closed."

I was about to argue when I caught him smiling. He got me.

I said to him, "That's what I love about New York. Everyone is funny."

We fist bumped and I was on my way.

But none of that's important when someone in the regular course of the day makes you laugh. It's special, godlike and extraordinary.

That's New York at its best.