The banality of kindness. 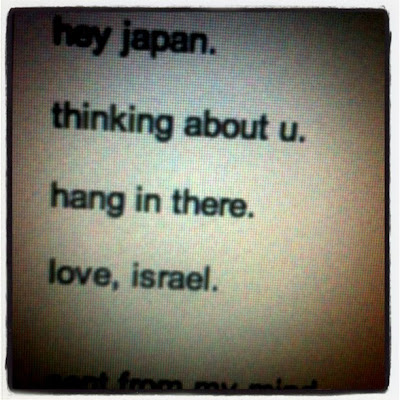 I just came across the above photo on Facebook this morning and it, like so much else, made me angry. C'mon. If you want to help a mangled child or a mangled country, a badly spelled message will not help.

David Brooks, the erudite conservative op-ed columnist for "The New York Times" has an interesting piece in today's paper. It's called "The Modesty Manifesto" and you can read it all here: http://www.nytimes.com/2011/03/11/opinion/11brooks.html?hp

These are some of the facts that stuck in my craw: Ninety-four percent of college professors believe they have above-average teaching skills. A survey of high school students found that 70 percent of them have above-average leadership skills and only 2 percent are below average. In the 1950s, 12 percent of high school seniors said they were a “very important person.” By the ’90s, 80 percent said they believed that they were.
Posted by george tannenbaum at 7:23 AM