Yesterday my friend Tom pointed me in the direction of this site http://www.nfb.ca/film/buster_keaton_rides_again which plays a 1965 documentary called "Buster Keaton Rides Again."

Keaton has always been my favorite silent star. Moreso than Chaplin, Lloyd, Chase and even Laurel and Hardy. Maybe it's that my younger daughter was born on his birthday. Maybe its his pratfalls and physical comedy mixed with his essential sadness.

I found the documentary interesting because of Keaton's fervor. In it he is 66 years old. And he's outraged that his director isn't listening to his ideas for the right gag.

But he has lost none of his fire.

Like Alain Resnais, the great French Director who was nominated for the Palme d'Or this year at the age of 91. 57 years after his seminal "Night and Fog."

Age has no meaning to the fertile mind. 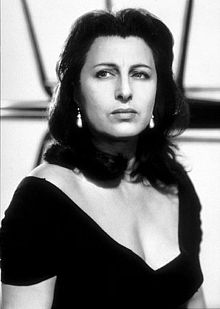 The picture above is of Anna Magnani, the great Italian actress who famously said:“Please don't retouch my wrinkles. It took me so long to earn them.”
Posted by george tannenbaum at 10:22 AM

it's true that many artists found their true signature rather late in life. And many who found it early continued to be creative throughout their lives.

And yet, it was Michelangelo who said 'Creative is what every man is at 20 but what no man is at 50'.