Tannenbaums I have known.

Not the most mellifluous of last names.

And hardly as popular as Smith, Jones, Chin or Mohammed.

Yet, through the course of my life, I've run into my share of Tannenbaums, often in strange places and under odd circumstances.

The most famous, of course, was "Tick Tock" Tannenbaum, illustrated below by my friend Patrick Hamou. 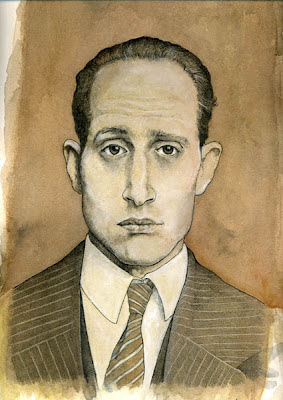 Tick Tock (my older daughter has assumed his moniker) was a notorious hit man for the Mob. He was in the original cast of Murder Inc. Not what you'd call a nice guy. He was always nice to me, however. Though since he spent most of his life in "the Big House" or on the lam, I didn't have that much to do with Tick Tock. You can read about him here: http://en.wikipedia.org/wiki/Albert_Tannenbaum

Years ago, I ran into a Peter Tannenbaum, who I believe is a high-flying denizen of BBDO. I had checked into L'Ermitage in Beverly Hills and they were convinced I was not George, but their frequent guest Peter. Since I was being treated like a king, I did little to disabuse the staff of their notion.

Just now, I got an e-card from a Steve Tannenbaum, who is a fund-raiser for my younger daughter's college. He wished me a Shana Tova and hoped my daughter was enjoying New Zealand. Which is fine. Except she's not in New Zealand.

Of course, there was the Wes Anderson movie "The Royal Tenenbaums." It was a run in with near-namesakes I enjoyed--though not enough to compensate for all the wags who called me "Royal" as if I hadn't heard that before.

Posted by george tannenbaum at 8:16 PM