Last night was another of those all-too-frequent evenings where I was visited by my old nemesis, insomnia. She kissed me awake around 3 and led me out, with Whiskey my pup, for a long walk, once again, along the river.

The East River, as we call it in the City, is not a river at all. It's a tidal strait that connects the turbid waters of the Long Island Sound, to the turbulence of the New York Harbor. Centuries ago when the Dutch were ascendant, the Dutch called the Connecticut River the East River, the Hudson, the North and the Delaware, the South. The names have changed over time and as New York and its Grid became dominant, the strait assumed its current name.

Old New Yorkers, and I count myself among them, will sometimes called the FDR Drive, which runs parallel to the East River, the East River Drive, the highway's name before Robert Moses gripped New York and made it powerfully his own.

There used to be tanneries, glue factories, abattoirs and a host of effluents that teemed into the river. Its filth was the butt of many jokes when I was a kid. But things have cleaned up since the 70s, and today there are jet-skiers in the river and the occasional kayaker.

Once years ago, my older daughter who is an accomplished open-water swimmer was going to enter a 2.4 mile race in the waters off Manhattan. She persuaded me to try a half-mile swim, though for the life of me I couldn't bear the thought of entering waters that when I was a child were considered open sewers. Fortunately, my daughter backed out before race day, and I was, like a witch who emerged from trial by dunking with her life, spared.

Whiskey and I walked, as we almost always do, north. I don't like walking south. The promenade narrows and the terrain is less interesting. There's also an interruption around the UN that disturbs the peace I find when I travel in the opposite direction. So, as I said, I go north, where the people are fatter and the crowds thinner.

Walking north there is a flagpole across from Gracie Mansion, a tall, naval mast of a flagpole that has at its tip the US Flag and on a cross spar the flag of the City of New York, an orange, white and blue affair with the seal of the city on it--a Dutchman and an Indian, and the green-leafed and white flag of the city parks department. 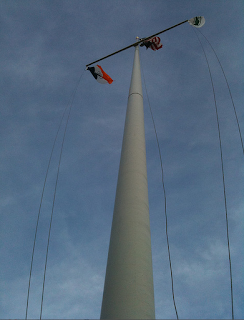 The land around the flagpole circles out over the river, an ideal spot for observing the turbulence of Hell's Gate. There were two Puerto Rican men in the overhang tonight, from the looks of them, twins around 30.

They knelt down in Diane Arbus-like unison and beckoned Whiskey and me over.

"Buenos noches," they said in perfect New York Puerto-Rican-Spanish, leaving the esses of their greeting off in true New Yorican-style. I greeted them back, imitating their island twang.

My dog looked tired, in fact she lay down at my feet, and we three humans leaned against the curved cast-iron that bowed in a semi-circle over the water. One of the twins began talking, looking at the churn of the current, not at me.

"Mi hermano and I married twin sisters," he began. "We are twins and they were twins." He took a long drag on the night and spit twice into the water. He was in no rush to tell his story. And I was in no rush to hear it.

"For one year all was fine. But soon it became clear that mi esposa and I, we loved each other."

The other man spoke now.

"And mi esposa and I se odian. We hated each other."

We all three now spat into the water.

"We cannot stand to be with each other at night. So mi hermano and I walk. Though he loves his wife, he walks with me."

"I would rather be home with my wife. But he is my brother and him I must be with."

Whiskey was up now, she pulled against her leash. I left the brothers to themselves, bidding them a buenos noches with no esses. And let Whiskey lead the way home


Posted by george tannenbaum at 1:31 PM