Some thoughts of yore.

I was born in the waning days of 1957--about ten decades ago it seems, or ten millennium if you think about all the ways in which the world has changed.

We were armed and aimed at the Russians, and they against us. World War III was being fought in Korea, Vietnam and outer space. There were Nike missile installations just a few miles from the house my parents bought in White Plains, to escape the sturm und drang of New York.

In much of the country, black people still couldn't vote. They went to schools that were separate and unequal and they had only just been able to play major league baseball. Pumpsie Green, the Red Sox first black player, was still more than a full-season away from playing in the big leagues. Still, it was, in many ways, a simpler time. Today, because they are today's problems, the issues of the world seem more intractable. You could find a way to negotiate peace with the Soviets. You can't negotiate with global warming. Or with the anti-fact-ers who wish to deny its presence. Likewise, though we were armed to the teeth against Krushchev, at least we knew who our enemies were. We knew how to track them. Today, if Israel attempts to destroy Iran due to Iran's looming nuclear capability and its promise to obliterate Israel, mass destruction could come from anywhere. A frightening prospect.

Even as a young boy, I grew up old. My father had a 1949 Studebaker, my mother a 1951 Plymouth. Old cars in the days when cars didn't last more than four years. What's more, at an early age I was exposed to "old" movies. Jimmy Cagney in "Public Enemy," Edward G. Robinson in "Little Caesar," Humphrey Bogart in "The Roaring Twenties." Even as a ten year old I was on a different plane than my friends. I had different reference points and I admired different people. The suburbs of New York, back in the 50s and 60s, still had milkmen, still had vestiges of trolley tracks that would appear whenever the asphalt thinned. There were street sweepers with their rubbish bins mounted between over-sized wheels. There was a hurdy-gurdy beggar who plied the downtown streets of my home town.

Today, everything, or nearly everything seems gone. We still pantomime dialing a telephone. But we haven't actually dialed one since the 70s. We still remember subway tokens. The 10-cent toll over the Henry Hudson Bridge ($4 today or $2.20 with EZ-pass.)

My wife and I get seltzer delivered to our apartment, ten 26-oz. siphon bottles to the case once a week. The bottles, clear or blue or sometimes green, are etched with the names of old seltzer bottlers.  Today at lunch we had a bottle marked "Louis Sisskin Good Health Seltzer." Bottles of Sisskin's are available on e-bay, but I can find no other evidence of who he was or where he carbonated. It's just possible that the gleaming new high-rises that have replaced the dilapidated old tenements of old New York sit on the site of Sisskin's old plant. But I'll never know. 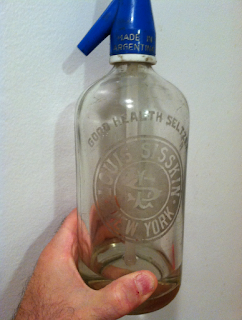 It is possible that we are living in the best of all possible worlds in the best of all possible times. Scholars like Stephen Pinker point out that this is--despite all the wars and skirmishes and the tarnish of Arab Spring--one of the most peaceful times in the history of the world. Further, despite the troglodyte impulses of the Republican party, more people have more wealth than virtually any time ever. Even poor people have electricity, indoor plumbing and luxuries virtually unthinkable just a few short decades ago.

That said, there are times when I siphon myself a cold glass of seltzer and I wish Louis Sisskin were around. Just so I could thank him.


Posted by george tannenbaum at 3:02 PM

"If Israel attempts to destroy Iran"...isn't it Iran that is threatening to destroy Israel?

You're right, Bob. I guess I wrote down what the world will say as opposed to what really happened.