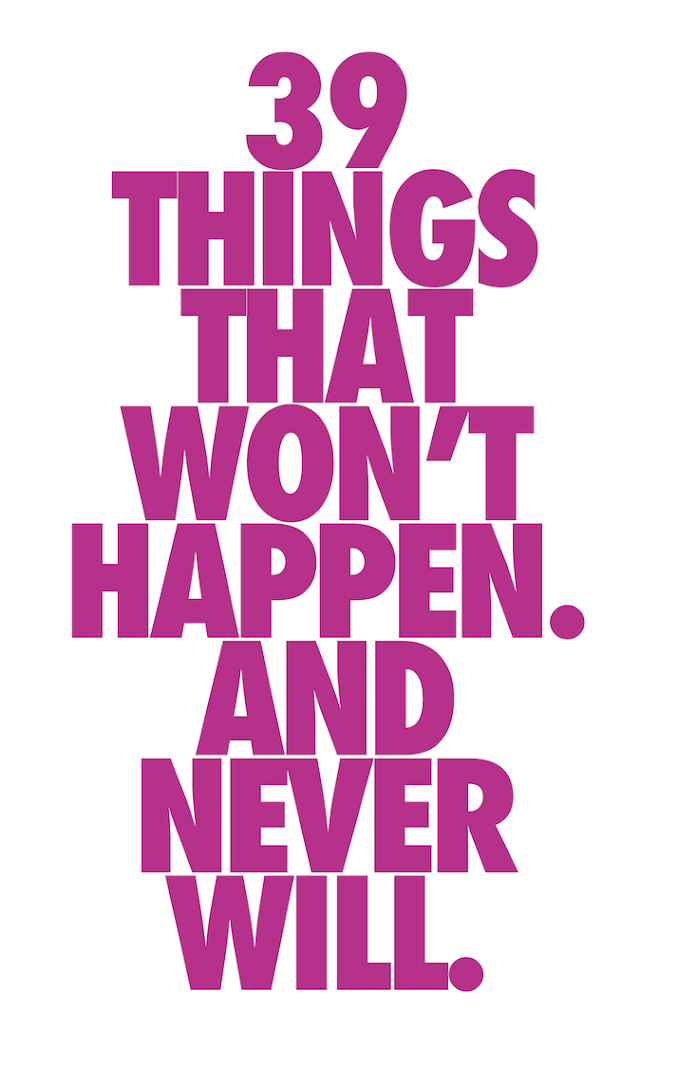 1.
A meeting will start on time. And the Zoom line will be open early.

2.
A meeting will end early. Everyone was attentive and the work got done ahead of schedule.

3.
Someone will get a raise without lobbying for it or waiting between 18 and 24 months.

4.
Someone will get a raise, period.

5.
The CEO of the holding company will walk around the creative department one afternoon--without an entourage of sycophants--to meet the people who make him money and to see how people are actually doing.

6.
The CEO of the holding company will actually leave his office, not to run for a limo home.

7.
The CEO of the holding company will say, 'If my people don't have offices, why should I have one?' And move into a cubicle.

8.
There will be a retirement party.

9.
A real rockstar and a ninja will actually apply for an agency job and not get it because they're too old.

10.
A telco or cable company will run a commercial where no one is yelling at you to take advantage of an offer that doesn't exist.

11.
Jan the Toyota woman after starring in 32,897 commercials with balloons will finally sell a Prius.

12.
Someone will create an ad that becomes part of culture. Unfortunately, it will become part of a yogurt culture and someone will eat it.

13.
A piece of body copy will be approved without 14 different colors of track changes.

14.
A piece of body copy will be approved.

15.
Someone will realize that diversity means more than diversity of skin tones and includes, to steal from Steve Jobs, people who 'think different.'

16.
An agency will retract a press release they issued because it wasn't honest.

17.
A holding company head will halve his salary from $20 million to $10 million and put the remaining $10 million toward diversity efforts.

18.
A client will say, 'take your time. It's important you get this right.'

19.
A CCO won't change the word "although" to "but" in your script so he can re-save the script document with his initials.

20.
The pitch will be done more than 20 minutes before the pitch.

21.
A late timesheet notice will be sent out from India and won't be in all-caps.

22.
Joe Pytka will be polite and say 'I love this board.'

23.
When people have to work the weekend in August, someone will arrange for the air-conditioning to be turned on.

24.
Someone will find a human in human resources.

25.
Awards shows will require notarized documentation that the work being entered was paid for by a client and ran in real paid media.

26.
Someone will be fired for saying 'advertising is dead.'

27.
Dogs will be allowed in the office.

29.
Ogilvy will win an account with more than one-million in annual revenue. Dollars, not yen.

30.
Someone will be fired for saying 'nobody reads anymore.'

32.
The printers will work.

35.
Someone who calls himself a 'storyteller,' will actually tell an interesting story.

36.
An hour will go by without the word 'agile' being used.

38.
WPP will fire me again even though I no longer work there.

39.
Cindy won't blow something up.