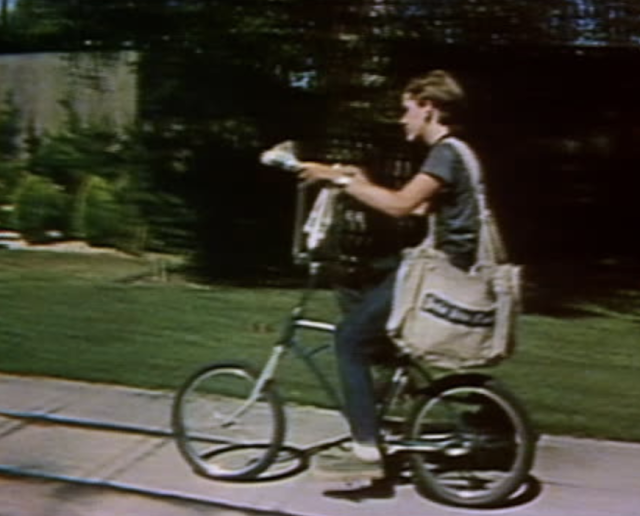 When I was a kid, like most kids of my generation, I grew-up with Depression-era parents who tossed nickels around like manhole covers.

Both my parents' mothers had raised them virtually alone. My mother's father, whom I never met, was a drunk and a gambler and made his meager living, when he wasn't drunk or gambling, carving gravestones for local mortuaries. He gave me my non-inconsiderable eye for type.

My father's father, whom I never met, died when my father turned 12 or 13. And before that had worked hard to earn the sobriquet, "The worst tailor in all of Philadelphia." He gave me my not-inconsiderable sartorial sense.

My parents, bent on getting more out of life, saved bakery string, used tinfoil, waxed paper and anything else that wasn't toxic and a few things that were, like their relationship.

Money being a crushing presence in my tilted little childhood home, when my older brother turned 13 or so, he dutifully got a paper-route in the neighborhood. Two years later, when I turned 13, I inherited his rounds from him and assumed the august mantle of "bread-winner."

In the late 1960s, the economics of paper delivery was probably not much changed from the rules that prevailed 50 years earlier. The Paper assigned you a route with between 40 and 50 houses.

You got two cents a delivery per day and tips. The math went like this. Forty houses times two cents equaled eighty-cents a day times six days/week. Or $4.80. Plus on average twenty-five cents tip per house, or $10/week. On a good week, when everyone paid up, you could bring in about $15. And there was no tax to pay--or at least, we didn't pay it. That wasn't terrible money for a kid in 1971 when a candy bar cost a nickel, Mad Magazine 30-cents and a comic book 12-cents.

I learned in that job, and in subsequent jobs as an attendant in a game room of a local amusement park, and a night-cashier in a liquor store on Rush Street in Chicago, that wages were pretty much fixed.

Sure, I could have added five more houses to my route, or clocked six overtime hours in the liquor store, but my wages were stuck at paltry. There really was no getting ahead.

Even my first career, as a putative English professor was pretty much the same deal. If all went well, I would ascend slowly from instructor to assistant professor to associate to full. Maybe I'd get to department head or, ahem, Dean of Student Affairs, but your course--and rise so to speak--was predetermined, slow and grueling.

When I gave up Academe for the "fleshpots of Madison Avenue," I had hoped to be escaping for the methodicalness of the corporate rise. Advertising, when I entered the business, was still marked by steep rises and even some wildly successful careers.

In other words, you could make a lot of money. And quickly.

Today, on occasion, people ask me, "How's your agency going?"

I let, usually, out a long sigh. And then say, "Well, it's a ton of work. But I'll tell you, for the first time in a long time, working for myself has restored the relationship between work and pay. The more I work--and I work 20 hours a day, seven days a week--the more I work, the more I earn.

The more I work, the more I earn.

There have been a thousand and nine articles of late about the dying or the re-dying or the moribund-ness of the ad business. Of the shortage of people. Of the near impossibility of finding talent. And so on.

But for my two cents, the rules of economics and the golden rule have both been abrogated by the current state of affairs.

Shortage of people BUT wages won't go up.

Talent's available BUT they won't be hired (too old, too non-diverse.)

Years of service BUT utterly dispensable.

I never really bought into the punditry who said "this is broken in advertising or that is broken." Advertising's broken because  industry capital acts as a monopolistic entity. It competes only on offering a market-grabbing price. It devalues work. It devalues its people. And so forth.

Work and reward are supposed to be connected.

In today's advertising industry, they're not.