A lot of what I see today in the advertising world is a one-time stunt designed, I think, to break through during a news cycle, not to build lasting brand value. 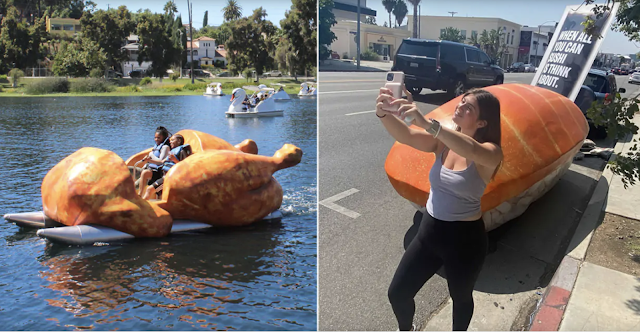 You'll see a brand like Postmates, above, creating a stunt like this with giant pieces of food, hoping that channel 148 Unction News and the Unction News Team will show 30-seconds of tape on their 11PM report, right after an un-popularly-elected ex-president and six-time bankrupt announces a boxing match deemed illegal in California that featured a 58-year-old man beaten in under one round.

The stuff of a million phony case studies and award entries.

When I grew up, we attached the phrases "Never Again," or "Never Forget" to the Nazi Holocausts which killed roughly six-million people, the vast majority Jews.

Today, we attach the same phrases to 9/11, and I suppose there's really nothing wrong with that.

Except, the short-termness of human memory.

The innate short-termness of human memory.

Something will push the Holocaust or 9/11 out of our memories. A new catastrophe will occur. The people who lived through the Holocaust are all but gone. It will be deemed long-ago and far-away, and we won't remember.

That probably pisses you off.

But we won't remember.

Just as we don't remember selling children away from their families during slavery times. Or thousands of lynchings a year. Or public swimming pools only the white public can use. Or neighborhoods, bank loans and government support unavailable to people of color.

Just as we don't remember the Never Again of mine disasters, of cops firing on strikers with machine guns, of Pearl Harbor, of the "Maine" being blown up, of the carnage of the Civil War or even the murder of small children in schoolhouses, or in the Civil Rights south, little girls in frilly dresses being blown up in churches by white supremacists.

When I see stunts trumpeted by agencies, written about in the advertising trade press or as part of an agency brief to create a movement, I get a little sick.

It's not just that I dislike this sort of work.

It's that the notion of a quick boom of impact being long-lasting and leading to long-term business gain is a spurious as donald trump's cranial merkin.

The stunt that makes the front page today is forgotten literally tomorrow. Because there is something new tomorrow that will "put Shakespeare back with the shipping news."

It lasts a few days. It might be all-consuming for 72-hours. But then it, and you, move on.

If you can take 20 minutes and sit down with a pencil and a piece of paper and write down five taglines you can think of, I'll bet you'll discover or discern something.

Most of the taglines were from the inundation period of media. Many of them haven't run for decades. But we remember.

Because we heard them over and over.

Because clients and agencies didn't believe you could make a lasting impression throwing confetti into a fan.

They spent the money. They had the patience to build something. They gave work time to work.

Here are the first 25 tags I remember.

2. When it absolutely, positively has to be there overnight.

5. It takes a tough man to make a tender chicken.

12. For everything else, there's Mastercard.

16. Because so much is riding on your tires.

20. A mind is a terrible thing to waste.

22. We run the tightest ship in the shipping business.

23. The antidote to civilization.