A meditation on Boxing. (Not the sport.)

One of the things I've noticed in life, especially as I've gotten older and am often adopted by young people at various agencies I've been sentenced to, is how the modern corporate structure--under the Draconian-guidance of Frederick Winslow Taylor and Taylorism--is about personnel regression to the mean.

In English, it's about "the system" making everyone mediocre. So the only outstanding people can be those in charge. (Outstanding threatens the Chieftains. They might have to share control, or give some up. Heaven forfend.)

Some years ago, it started with my friend, a young account person I'll call S.

I remember S--at 26--being in a meeting. Dutifully taking notes while the SVPs were gabbing. S left early, when the oldsters started kibbitzing and one wise older account person said aloud, "I have a feeling we'll all be working for S someday."

One night S came to my corner office.

Her eyes were red from weeping.

"I'm getting nowhere," S explained. "And people resent me."

I took a piece of paper and a pen--we had office supplies in the office in those days, and I drew this. 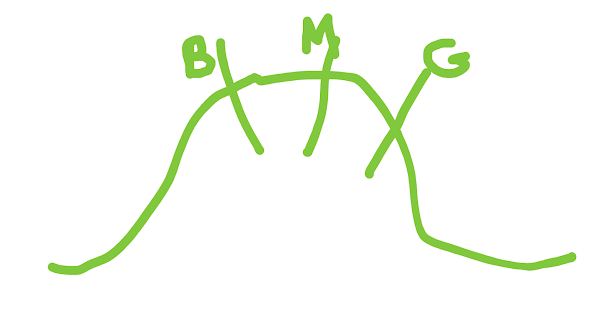 "But once in a while, there's a problem."

I drew another Bell Curve.

If you're X on this Bell Curve, and are far more capable--brilliant even--than the others nominally in your peer group, you cause trouble. If there are eight others in your cohort, most social organizations would rather squash you--you're the outlier--than bring the others along before they're ready. So, they bring you back to where the others are. They keep you in a box, because you threaten the hierarchy, rather than figure out how to let you blossom. HR doesn't know how to free people. Just think of the notion of "salary bands." You fit in a Procrustean bed.

There are storied Madison Avenue workplaces (they're not really agencies anymore, since they work not as agents of clients but for their 'shareholders,' they that care only about the bottom line in the short term) that give their offices names like the Nougat Factory or the Caramel Assembly Line.

Really, most places should be called Squash Factories or Zucchini Ziggurats.

They squash the souls of the people they should be promoting.

There are plenty of reasons our industry is all but dead. I'd say "on life support," but there's little life left and no one is supporting it.

I wrote the essay below for a client's website once. They didn't buy it. Maybe it was too much for them. So it belongs to me and GeorgeCo., LLC, a Delaware Company and I'm pasting it here.

Un-boxing yourself. For all the world to see.

Something you encounter every day.

And have encountered every day

probably every day of your life.

Most people live their life inside a box.

A box that tells them where to sit.

What schools they should go to.

What classes to take.

A box that pushes in.

Pushes in, sometimes, from all six sides.

Closing in on you.

Boxes don't go away when you get older.

They don't get any more roomy.
Or flexible.

You don't get any more used to them.

Even if--
even when--even though you sometimes try to convince yourself it's ok.

That tells you exactly what to do.

And who to do it with.

And how to do it--the way it's always been done.

A box that tells you to toe-the-line and keep your head-down.

And don't think too much.

And don't speak up, speak out or speak your mind.

A box that says,

stay in your swim lanes.

Watch your back and watch out for the other guy.

A box that limits.

Your love of doing what you love.

The world isn't a box.

Not if there's a place that lets you breathe.
Breathe.

A place that values you.

Your constant stream of what-ifs.

A place that values you because you're you.

Not some homogenized and pre-approved version of you.

Or forced into someone you're not.

A place of freedom--not confinement.

Of autonomy not automatons.

A group of people--diverse, eclectic, nutty and brilliant.
Eccentric.

But
who work with clients, with each other, with the world

To push and fight and learn and laugh.

And to come in tomorrow and do it again.

We could go on about how many people we have.

And how fast we're growing.
We could talk about what we do and what others don't.

But this is bigger than that.

This is about doing something different.

About doing something more important.

Pushing full-force against the usual.

Saying NO to the status quo.

This is about destroying that old acquaintance.

And imagining the future.

And even more important than imagining it.