A Crash Ha-Shanah Story. My Father Takes Me Golfing. 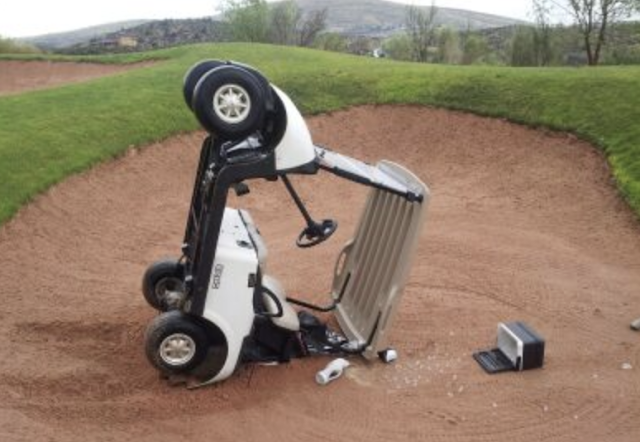 I have a two-inch scar on the inside of my left elbow that I got from watching my father play golf.

Sometime around the time I was nine, my father was well-enough recovered from his most recent heart attack so that he was able to persuade my mother into letting him play golf. I don’t know that my father actually even liked golf. However, he had achieved enough career success on his way to his heart attacks and had rubbed enough elbows with enough successful advertising people who did enjoy golf, that my father felt obligated to play the game and probably obligated to say he enjoyed it.

I wasn’t privy to the pre-game conversation my mother and father had about my father playing. But I assume at the end of it my mother reluctantly conceded. My father could play golf as long as my father took either me or my brother along and rode an electric cart. There would be no carrying a golf bag for my father. No walking up hills. No strenuous activity. My father was still recovering from his infarction.
[Of all the things that have scared and scarred me in my life, perhaps the most indelible was seeing my father arrive home from the hospital to the house he worked so hard to afford. There were nine steps up to his bedroom. He would lift one leg, wait, then lift the other leg to the same step. Climbing those nine steps probably took him 45-minutes. It's hard when you're nine to see your father as the walking dead.]


The only other wrinkle of the day is that it was Rosh ha-Shannah. Neither of my putative parents had a shred of religiosity in them and my father had an outright hatred of rules of any kind and regarded ritual as the hobgoblin of little minds. Nevertheless, to play golf on Rosh ha-Shannah in full view of the neighbors, Gentile and Jew alike was uncool. The Jews would disparage you for violating a Holy day. The Gentiles, for getting a day off without their approval.

However, my mother conceded something she did with the frequency of an honest politician and allowed my father out. She was as stubborn as a glacier. Maybe she needed some time alone—my father had been convalescing at home for a good two months. Maybe she simply wanted him out of the house. Maybe she thought the fresh air and an afternoon with his son would be good for him. Maybe it was my father's ability to quip his way through any situation that finally wore her down. "The ol' ticker still has a lot of life in her," he would say when asked how he was feeling. "Ol' blue eyes will be back in no time."

My brother was older than me and was slyer and craftier than I was at getting out of things like accompanying my father. Maybe he used his guile to extricate himself. Maybe, on the other hand, he had some school event or a sleepover party. Whatever the case, I had to go with my father and watch him play.

My father’s reward to me for going with him was he allowed me to drive the electric cart. The cart, though it had but three wheels (two in the back and one in the front, which turned with the steering wheel) was as close to driving a car as a nine year old could get. Wow, I thought. I’m driving. Braking. Speeding up. Slowing down. Driving. Look at me, I’m driving.

I watched as my father got out of the cart on the first tee and selected a club. I’ve lost half my father, I thought to myself. He used to be a big man. A football type gone to seed. Now he was spindly, long and bony. Worse, he walked slowly, like he was on ice and afraid to fall. I had known my father had been sick but it wasn’t until I watched him on the course that I knew how sick he was.

He hit the ball and made his way, on ice, back to the cart.

He answered with a platitude. Something like “Oh, I’ll be hitting them further than that once I get my sea legs.” Or “Feels good to get back on the ol’ horse after she throws you.” Or “It ain’t Arnold Palmer, but that wasn’t half bad, was it?”

We continued with our platitudes for most of the afternoon. My father hitting the ball. Returning to the cart and then driving with me until he had to hit it again.

And he’d respond quickly, eagerly, jokingly with something like, “The old fella’s still got it.”

Occasionally I’d escort him from a shot back to the cart, or take a club myself to dig through the woods in search of a lost ball, or I’d rake the neat white sand of a trap after he visited one.

That was pretty much the afternoon. A sunny day in the early fall, with few others on the course. My father hitting the ball. Me driving the cart.

Then we came to a hill. Maybe midway through the course. It was a downhill and the path down which carts were to travel was studded with small rocks. To my nine-year-old eyes, the path looked good for sledding. It seemed steep and treacherous and so perfect for careening in the snow.

He looked at me, slightly annoyed, and then leaned over on the single seat we shared and navigated the cart down the hill. Or tried to. Halfway down the hill we hit a protruding stone. It upended the cart. The cart turned over, my father’s clubs snapping in half against its weight, one of the halved clubs’ shafts cutting deep into my left elbow. The cart toppled on top of us.

My father lay dead on the ground. My right hand filled with blood as I tried to stop the bleeding from the gash on my elbow. I ran for the clubhouse to try to get help. I found two men there who quickly drove over the course in a white Plymouth station wagon to where my father lay.

The cart was over on its side. His clubs were strewn and bent. The men ran toward him. I wasn’t as fast and trailed a bit behind.

By the time I got there the men had my father sitting up. He breathed deeply and slowly.

He looked at me. Saw the blood on my arm, my pants, my shirt. The two men helped him to his feet and led him toward the Plymouth.

Finally he said to me, “Guess that one got away from me, eh, son? I never even saw what hit me.”

The men in the Plymouth called various local doctors to try to get some help. But most of the doctors were Jewish and were taking the day off. As Jewish doctors had been doing for almost 6,000 years.

Ultimately, a cardiologist was found, Jewish, and my father spent the whole way to the hospital apologizing for playing golf during the holiest of days.

Whenever anyone asked, he'd quip, "I got in a fight with the big caddy in the sky."