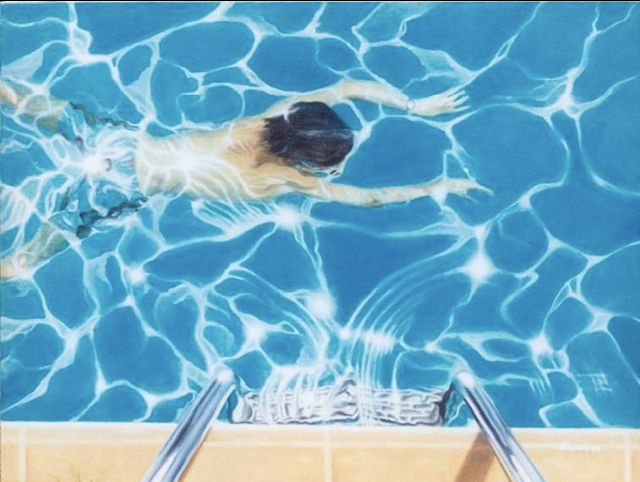 When my older daughter was about four or five she came to me with a huge four-or five-year-old's problem. It was summer and we were sending her to a sylvan day camp in the country far away from the bubbling asphalt streets of Manhattan.

[As an aside, the smell that evokes summer in my mind is the stench of boiling tar or asphalt. Back when the rich paid taxes, the city would always redo the streets when the weather got warm. Where some kids have the smells of fresh-cut grass to remind them of carefree, school-less days, I always recall the hairy arms of broad Italian men in sleeveless t-shirts, shoveling asphalt into potholes in the Bronx.]

Back to my daughter. She came to me on the precipice of tears.

"Dad, tomorrow I have to take the "A-water test," to get in the highest swimming group. It's seven laps (that seemed to Sarah a channel-crossing). I'm not sure I can do it."

"You don't have to swim seven laps," I told her.

"No, Dad," she told me. She was always good--she is to this day--at correcting me and putting me in my place. "I have to swim seven laps."

That seven laps of conversation took place about thirty years ago, and there's hardly a day that goes by when I don't think about it.

Right now, I'm emailing with a friend. She's a very good writer--the kind of writer whose writing is so good it scares other writers--and she is taking the long day's journey into beginning a blog.

She's afraid of having to swim all seven laps.

The thing about anything you pursue is not to make yourself anything special out of the box. If you're a writer, don't try to be Melville or Faulkner or Virginia Wolff or anyone.

If you're a ballplayer, forget about being Christy Mathewson or Hank Greenberg.

If you're a painter, dispense with notions of Van Gogh or Rembrandt or even Jackson Pollack.

In some cultures, like some of the first peoples in Alaska, everyone carves scrimshaw and makes small sculptures of seals and other local flora and fauna. There aren't specialists. The level of artistry is well and widely distributed. And everyone does their own thing, as they can. Everyone brings their world view into focus in whatever they're working on.

I think the trick to accomplishing anything, to pinning your name on anything that might, someday, somehow achieve wider recognition, is not to strive for that recognition. Instead, strive to make your art, or your tennis game, or your spaghetti carbonera, quotidian. Make it something you do every day and leave it at that.

I grew up a deprived child.

With a mentally-ill and borderline mother. And a heart-diseased, missing and drunken father. In the seventeen years I was under their tilted roof until I ran away to play ball in the Mexican Baseball League, barely a kind or encouraging word was ever exchanged. When someone is kind to me today, so many years later, I look at them like a raccoon cornered. I'm sure they're trying to hurt me somehow.

Yet, when it came to be my turn as a father, I had practiced learning a loving-kindness as well as I could under my circumstances. I practiced hearing what my daughter was afraid of and I thought what I might have liked to have heard when I was a tender age and also afraid.

I thought about that and I told Sarah to swim just one lap at a time.

I am still almost daily afraid of something, though I have nothing, really, substantial to be afraid of. My health is good--except for my arthritis, my insomnia, my torn right rotator cuff and my losing battles with depression. My business is going better than it has any legitimate right to be going. But none of that means I'm not afraid.

I still do that simple job I described to Sarah so many decades ago. Whether it's the miles I have to go when I am exercising or the ads and assignments I have to create when I'm on deadline.

And then I do another.

That's all I can do.

And all there is to do. 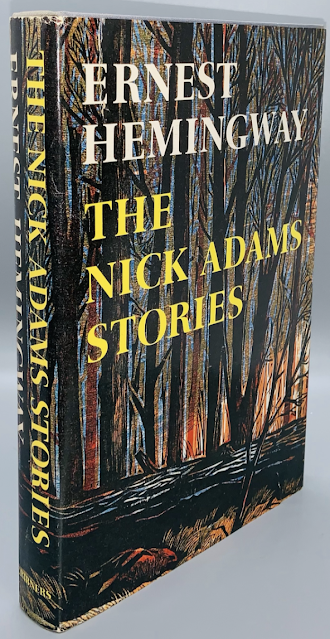 Or, as written by a very-young Hemingway and published in a collection called "The Nick Adams Stories,"

“He had already learned there was only one day at a time
and that is was always the day you were in. It would be today
until it was tonight and tomorrow would be today again. This was the main thing he had learned so far.”

It's easy to mock Hemingway.
It's harder to ignore him.