The Power of Positive Dumbness.

Many years ago, decades actually, I shot a direct response commercial for IBM.

This was so long ago, giant companies still believed they actually had to sell things rather than just show generic footage of impossibly thin people from the fattest civilization on earth and close with "IBM. This is how we 'puter."

Oddly enough, in my spots (I had shot a package of eleven) there was no one in the entire :30 seconds who spontaneously started dancing, much less spinning in a field grass.

One particular commercial was for IBM's lightest, smallest ThinkPad. The kind of PC business travelers use. So we featured an actor dressed up as a pilot describing the details of the machine. Stuff like, "On your left, you'll see two USB ports and on your right,..."

When I showed the rough-cut to Steve Hayden, who was leading the IBM account at the time, he laughed. I remember what he said to me: "That is profoundly, profoundly dumb."

I received that as about the highest praise one creative can bestow upon another.

The fact is I often look at the video above to calm myself down. Picasso's painting, you could say, is profoundly dumb. He transforms art to its most reductive, to its most simple. There is nothing elegant or high-falutin' going on here. Just a message of human universality that even Ayn Rand could accept.

As I round into my third year of running GeorgeCo., LLC, a Delaware Company, one of my "best practices" is to run ads for myself.

999 out of 1000 ad agencies have so little belief in the efficacy of our profession that they don't advertise. I run about three ads a week on LinkedIn and usually get on the order of 25,000 views each.

Because, somehow, I've built a network of about 20,000 people on LinkedIn, this effort, except for my brain-power expended is free. That is, it costs me nothing but the energy to come up with about eight

From those, say 75,000 views a week, I might get ten new connections, five inquiries, and one new piece of business. You don't have to be Gottfried Leibniz to understand the efficacy of that calculus. 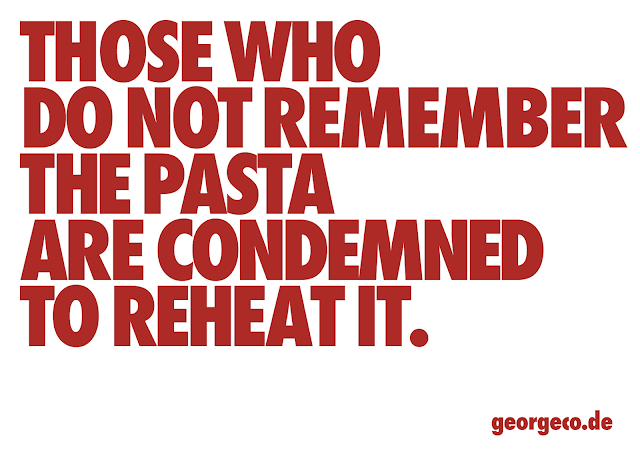 For about the last week--because I have so much hanging over my head including a Ted Talk to deliver in Lisbon, Portugal, I've been in a bit of an ad slump. I haven't run a good ad for GeorgeCo in a while. I feel the pressure. I never liked the idea of falling off a horse and not getting right back on.

Earlier, I was on Twitter for a moment and tweeted a response to a tweet from Dave Trott that I thought was funny. Three synapses later I said, "that would make a good ad." Six minutes later I had posted it.

A few hours later, I had five thousand of response. And a dozen from the sort of people who tend to hire GeorgeCo., LLC, a Delaware Company.

Of course, being me, I rebuked myself for the dumbness of the ad above. It says nothing about who GeorgeCo is and how we think, or even what kind of clients we work with.

It might be a pun. That form of humor now nearly completely banished from advertising, though puns almost always make people laugh. As writer Eve Babitz once said, "Any man who cannot resist a pun will never lie up-pun me."

But all of that's ok.

My little ad made a lot of people smile. Maybe it earned a laugh or two. Maybe someone said, 'fuckin' George. He's funny."

Sometimes that's enough for an ad or an agency.

An ad doesn't have to be profound.

Just like your best friend doesn't always have to be wise.

Sometimes a smile is enough.
😀