Of all the great advances brought on by the rise of the internet, perhaps most-seminal is that it's easier than ever to buy expensive socks, teeth-whitening gels and blue-light-filtering reading glasses.

At my advanced age of 19-years-older-and-going-away from Rich Siegel's 44, I no longer have many consumer wants. When we bought our new old house up here on the Connecticut coast, we bought the new furniture we needed and we replaced the washer-dryer that broke and we got some exercise equipment we keep in the basement. But besides those things, I don't crave little accouterments or bric-a-brac that clutter up a home and a life.

Though we're slowly re-doing things up here. I was told that five-panel doors will complete the cottage look. But I can't make myself care about door opening solutions. And it appears I'll need a separate, and presumably equal, door closing solution.

As for clothing, Covid has meant about a year about evenly divided between baggy shorts and elastic-waisted sweatpants and old t-shirts often with more moth-holes than shirt.

The fact is, outside of a new electric car and maybe an expensive  Celestron NexStar 5SE programmable telescope, there's really nothing I want. The telescope is to help me start overcoming my complete lack of astronomical knowledge. Outside of being to identify the Big Dipper, the North Star, Orion's Belt, Venus and in the fall, Mars, I'd like to know something of the galaxy. At least 1/10th as much about the stars as an ancient Greek from 4000 years ago, or a Portuguese fisherman from the 15th Century.

Nevertheless, I live--no matter how I try to avoid it--in a culture where shopping closes in on us like the timesheet police at a money-losing agency. So I find myself, more often than I'd like to admit looking at things I have no intention of ever spending a plugged digital-nickel on.

What I've noticed as I faux-shop my way through the internet is how absolutely divorced writing today is from the cares, woes, joys and concerns of humans. I always think of this ad below as the apotheosis of empathy. Some art director and copywriter and account person and client actually understood what it meant to be on the road, selling, traveling from city-to-city and cheap hotel-after-cheap-hotel night-after-night. 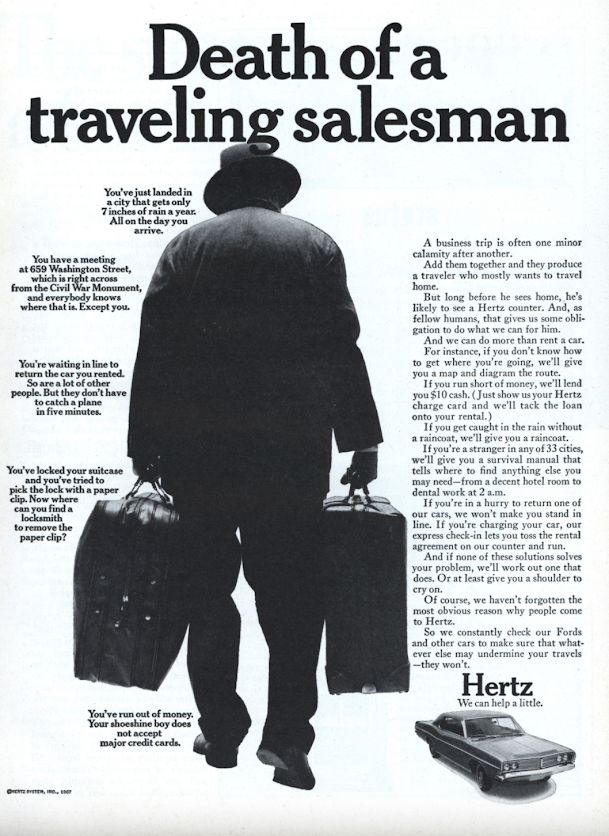 I hear a lot of talk from the ad community about the poor representation of BIPOC, Asian+, LatinX, Women and LGBTQ people and cultures in advertising.

I was on a podcast recently discussing it. I said something that was regarded as inflammatory, insensitive and wrong-headed. I said, a bigger issue in advertising is our complete lack of humanity. I'm not denying biases against the aforementioned groups, but there's a bigger bias against treating all people with honesty, intelligence and humanity. We under-represent kindness, understanding and humanness as well.

I pointed to writing like this from the Caddis site. It's not just bad. It's wrong. Pompous. Insensitive.

It's written more to convey pretense than meaning.

There's no promise, no truth, not even any words I understand.

Wipe my ass with a feces appliance. 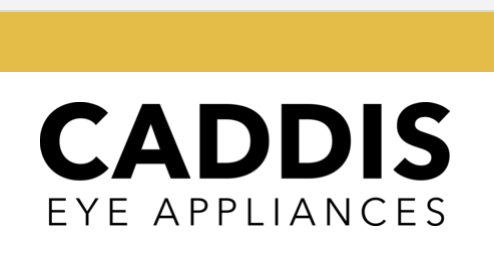 Maybe even worse, I looked at a website selling expensive condos in an expensive suburb outside of New York City. It's built in the middle of nowhere yet, we're perfectly bi-racial and bi-generational. And we caress equines.

After roughly 200,000 years of humans on earth our five senses are coming together in unexpected ways. 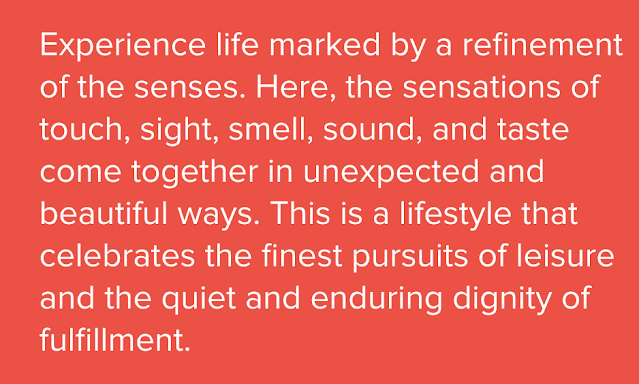 Then, there's something they call signature butler service. I suppose that means your butler will sign checks for you. 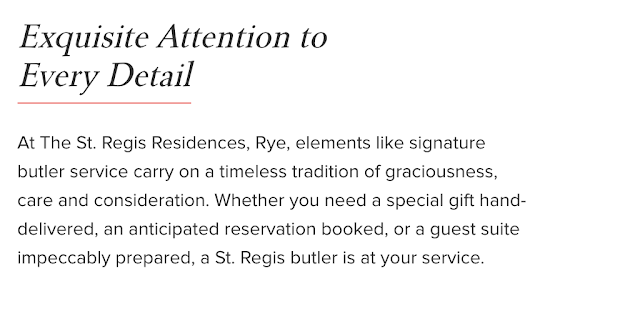 Though this particular agglomeration of Chinese sheetrock and veneered particleboard is about a mile from the sea, apparently that's close enough to reflect the splendor and allure of the shoreline. Absolutely nothing about red-tide, Coney Island whitefish or beach-syringes, "glimmering off the water." 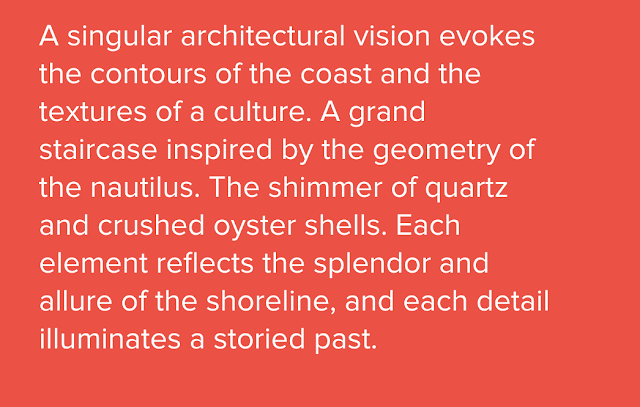 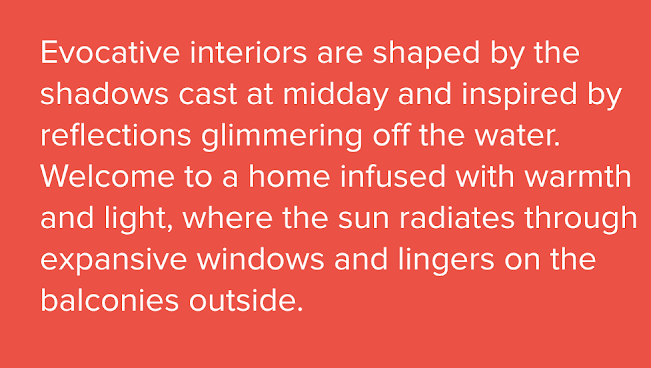 I'm sorry. This is anti-everything, including anti-corpuscle, anti-DNA, anti-breathing and anti-living. It is not in the least human. It has no relation to realness or empathy.
I have rarely seen the sun lingering on a balcony outside. The sun doesn't linger. The earth rotates around it, and so it moves inexorably. What's more, I've never seen a balcony inside. That's the thing with balconies. In two words: they're outsiders.
Here's the copy from the Hertz ad. I retyped it from the ad I posted above. It's good practice to retype ads you like. It helps your fingers learn.
Notice the honesty. Right down to the candor of the tagline. We can help a little. Not a lot. There's no over-promise here. No transformationalismism. No bombast, hyperbole, bullshit.
If you ever feel the need to read of a piece of copy that really speaks to people, read this. If the male pronoun offends you, change it to something that doesn't. Then read this again.
If the old references from pre-GPS, pre-ATM times affect your head, find new things that make service matter and mentally include them. If you think there's nothing any advertiser can do to make their brand real and human--you'd be better off not reading this blog anymore.

A business trip is often one minor calamity after another.

Add them together and they produce a traveler who mostly wants to travel home.

But long before he seems home, he's likely to see a Hertz counter. And, as fellow humans, that gives us some

obli­gation to do what we can for him.

And we can do more than rent a car.

For instance, if you don't know how to get where you're going, we'll give you a map and diagram the route.

If you run short of money, we'll lend you $10 cash. (Just show us your Hertz charge card and we'll tack the loan onto your rental.)

If you get caught in the rain without a raincoat, we'll give you a raincoat.

If you're a stranger in any of 33 cities, we'll give you a survival manual that tells where to find anything else you may need--from a decent hotel room to dental work at 2 a.m.

If you're in a hurry to return one of our cars, we won't make you stand in line. If you're charging your car, our express check-in lets you toss the rental agreement on our counter and run.

And if none of these solutions solves your problem, we'll work on one that does. Or at least give you a shoulder to cry on.

Of course, we haven't forgotten the most obvious reason why people come to Hertz.

So we constantly check our Fords and other cars to make sure that what ever else may undermine your travels--they won't.

Hertz.
We can help a little.

From Papa, who wrote great novels shorter than decks on social media. 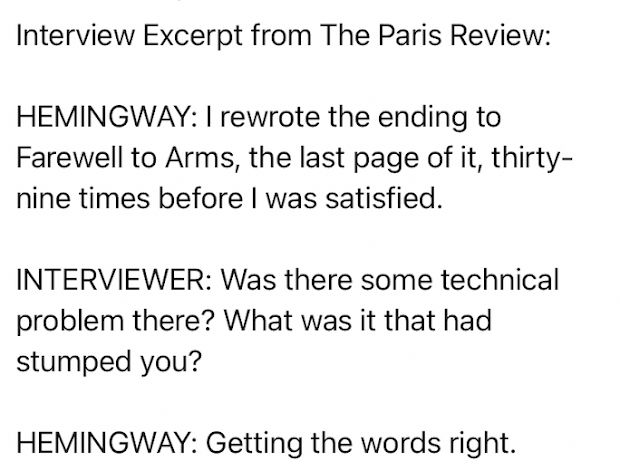