One of the strangenesses of life, especially modern, up-scale, type-A people's lives, is how much can seem decided for you by forces that go beyond your corpuscles.

Many people, as they make their way or lurch their way through life, hit these markers like a well-trained marathoner, ticking off the miles and the water stops, and the landmarks on the course. They're there to let people know they're moving along--hitting their marks.

I don't find it at all unusual when I hear people say, "my calendar didn't synch." However, it almost always strikes my cranium the wrong way. Nothing to do with synchronization. More to do with  someone or something sinking. Like a spiritual Andrea Doria.

It seems, too often, that there's a certain sense of horrid predestination in our professional lives. That's a round-about way of pointing out how trapped I think so many of us are. It's almost, without sounding sci-fi about, it as if we are subject to forces beyond our control. Forces that tell us what to do and when and we're trapped by some cosmic plan we never even had the chance to opt-out of.

Of course, I was as trapped, or more, than anyone. I'd been working in the agency business for 37 years when I was tossed out on my 'not inconsiderable obliquity.' My well-established course got land-mined, then nuked, then sprayed with small-arms fire, just to make sure no one was left alive.

Or as Dashiel Hammet wrote in the most important part of "The Maltese Falcon," 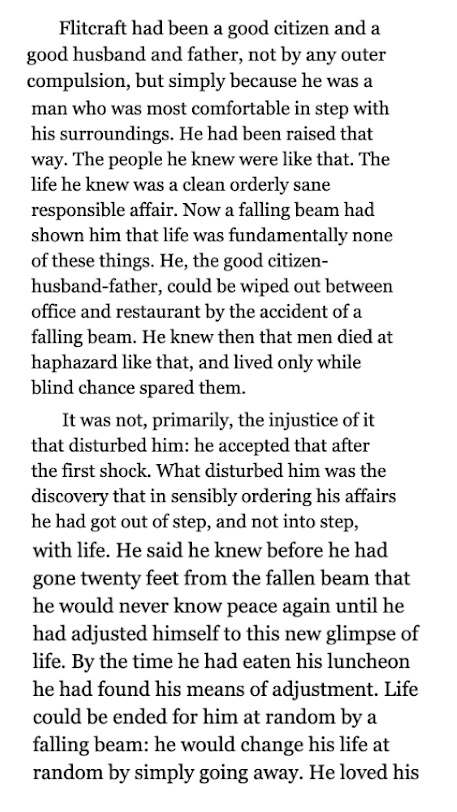 And that's what's weird about all this. Life. The agency business. Getting tossed out on your keister at the age of 62. That's essentially having a beam fall from a skyscraper and strike you.

You've spent your life sensibly ordering your affairs. Only to find out that the ordering of them got you out of step with the randomness of the universe.

By ordering my life around a predictable paycheck, predictable assignments and predictable predictability, I was pretending that life and the ad industry wasn't as subject to falling beams as it is.

I should have left Ogilvy before they left me. I should have known the beam was falling--god knows, I'd been seeing and hearing it for years. But I said, 'nah. I'll be ok.'

So I was booted out.

Booted out into a chaotic covid universe.

And you know what?

I'm working my ass off with the best people I've ever worked with. With the best clients too. Giving me weird things to do, because they recognize the weirdness in me--and my weird set of talents, ambitions, abilities, and humor.

We laugh, my associates and I.

And there's no one to scowl or wag a stern finger or say, "quiet," because there's some unappreciative, low-margin client in 11A making the 17th-round of changes on a 728x90 banner that will run in a Estonian-language trade-magazine.

There's no petty bureaucrat giving you a 29-digit timecode and telling you you're over or under hours and you're about to be locked out..

There's no one--hahahahahahahaha--telling you YOU'RE OWNED. Like the slave you've been made.

My head came off when I was fired and my brains looked like spin-art done by someone with, god forbid, Parkinson's. It still does some days.

But that's fine. And good. And fucking normal.

Maybe spinning counteracts the 1100 miles per hour rotation of the earth as we make our way around our dying sun.

Maybe rather than knocking you off your equilibrium, spinning puts you instead in balance.

Posted by george tannenbaum at 4:49 AM