Advice for living. From the dead.

One way of assessing what kind of effect I've had on the universe happens when someone I know--and even love--knocks me in the head, or sends me a text, or mumbles in my direction and says, "Did you read so and so's obituary?"

I was born into an admiration of death-notices--and at the near-constant behest of my sporadically-energetic father--often had one ripped out of the morning Times and insistently placed in front of me.

I was just trying to eat a piece of toast. I often ended up with a life-lesson.

The Times does an amazing job with their obituaries. They cover all creatures great and small. They have their lives condensed and intensified--80 years or so turned into a two-minute read. Their life story is theirs, their successes and set-backs, and more often than not, a joke, a story, a lesson that enriches your life.

The fact is, I have become, over my many years, something of an obituary connoisseur. I've read whole books of them--reading the Economist's obituary on John Maynard Keynes, or The Times of London's account of Winston Churchill, or closer to home and less political, the New York Times' recent obituary of David Mintz, the man who invented Tofutti non-dairy ice-cream.

While there are many who decry my love for obituaries and see it as evidence of my lugubrious and dour mien, all I can say is an old New York-ism: "Don't knock it till you've tried it." 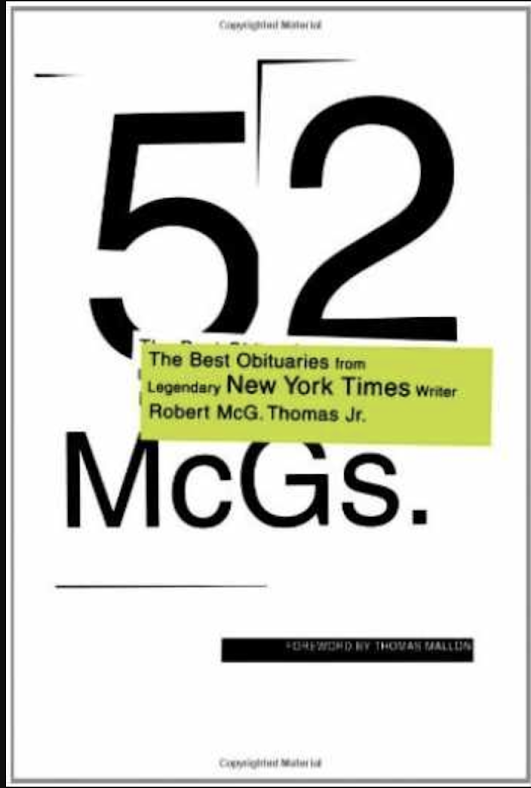 If you buy this slim book and don't get handed a laugh or ten, I'll refund your money. Assuming you can find me. 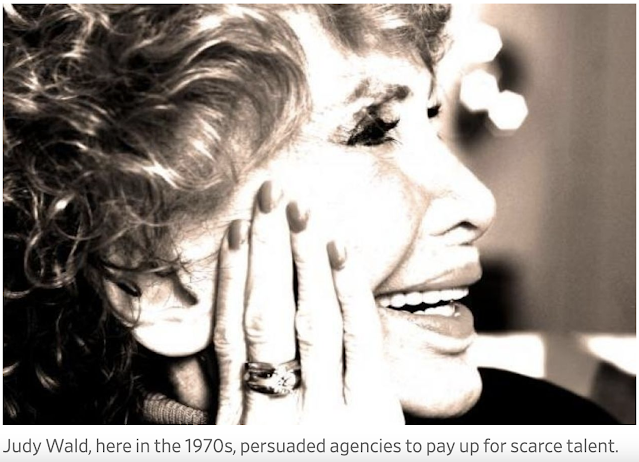 Last week, important in ad circles, The New York Times ran the obituary of legendary headhunter Judy Wald. Wald's selling ability might have led to the rise of the primacy of creatives in the ad industry--at least before the entire industry was subsumed by petty CPAs and cost-cutting Holding Companies. You can read the Times' obituary here.

Here's one anecdote from the Times that might just indicate how comparatively impecunious the agency business has become. [Wald] "loved to tell the tale of how she had once collected a fee for moving an executive from one job to another within the same agency.

“I wasn’t about to give any freebies,” she told New York magazine.

However, what prompted today's post was my wife, Laura. I had read the Times' obit last week when it came out. But she pours over the Weekend Wall Street Journal (arguably the best newspaper in the world if you can ignore the fascist opinion pages) like Champollion de-coding the Rosetta Stone.

"Did you read the Journal's obituary of Judy Wald," she lovingly asked me.

"Read it," she demanded. She was, in that two-word sentence, more Lavrenti Beria than the woman I married, so I complied within about four seconds.

To be honest, I was a little pissed. I had been in the middle of something, and the Journal retread a lot of the same ground the Times had covered. Then I got to the obituary's crescendo, neatly tucked where it belongs, in its last line.

"In her interview with New York magazine, Ms. Wald summed up her philosophy this way: 'Love many; trust few; always paddle your own canoe.'”

We live today, it seems to me, in an elder-less universe. Wisdom--and the experience of living--is most-often subordinated to the splendor of the photograph of the grilled scallop you've uploaded or a badly shot short-film of a random person dancing or something equally banal.

One of the reasons--perhaps the main one--I read obituaries is that they contain the wisdom of the ages--often from the mouths and minds of those who have had long and illustrious lives and are asked to reflect.

A good reporter knows how to listen to those reflections and, with skill, can turn them in the epigrams that in some cases would not be out of place among the 147 maxims attributed to the Oracle of Delphi.

I've highlighted two of these pearls above. I'll put them here again. Because I think they're that good. My guess is, if you follow them--as the Ithakans followed their Oracle, you'll probably have not just a better career, but a better life, too.

“I wasn’t about to give any freebies.”

“Love many; trust few; always paddle your own canoe.”