Of Yoyos and Yumans.

A friend called the other day.

He had just gotten a job offer. A rare event these days.

"I've gone more than three years without a raise," he said. "I said to my boss. Don't counter-offer. It's only going to piss me off. You haven't been able to get me a dime since 2017--and now that I'm leaving, if you offer me more money it only points out your insincerity and cheapness."

"You said all that?" I asked. "I guess you're not planning on coming back any time soon."

He, not so rare an event, had just gotten fired.

"What happened," I asked.

"Pretty much all of upper-management has left in the last 12 months. My new boss hated me. About three or four other groups wanted me to work on their business--but my boss squashed it."

"That sounds vindictive," I said.

"Yer durn-tootin'. If you're better than your boss and no senior people are left minding the story, you're screwed."

Robert D. Putnam is a Harvard University, John F. Kennedy School of Government political scientist and professor of Public Policy. He's also the author of the best-selling book, "The Upswing."

In The Upswing, Putnam introduces two phrases, or acronyms, that I think have some bearing on life today--and of course on the advertising industry.

The first, harrowing term, is YOYO.

YOYO doesn't allude to the ups-and-downs of today's capricious economy--an economy which since the Ronald Reagan years has presided over a massive redistribution of wealth from the poor and middle-class to the mega-wealthy.

It's well-known, for instance, that Warren Buffet, a man with between $50 billion and $100 billion of wealth pays taxes at a lower rate than, say, his secretary. And that the Walton family, which has something on the order of $200 billion of wealth uses government payments to make up shortfalls in their employees' salaries. Even Zoom, you know, that Zoom, paid no tax during 2020, a year where its profits were up 4000%.

YOYO stands for--You're On Your Own.

We see this everywhere in our business. You get no help. You have no security. You get no raises, no bonuses, no training. You have a job--but really no long-term hope. Meanwhile, if you're Instagram friends with some of those in the c-suite, you'll be able to witness their increasingly Lucullan lifestyles--their expense-account dinners, their beach-homes, their braised whatever in whatever sauce.

Putnam is hoping that America can shift from YOYO to WITT. YOYO can be summed up by this anecdotal piece of information. Michael Roth, outgoing CEO of Interpublic makes about 230 times what the average IPG employee makes. Ogilvy alone, by my calculus, has five or seven CEOs and ex-CEOs on payroll right now--at a time when it is hemorrhaging business, revenue and people.

You're On Your Own, as represented in these charts from Forbes magazine. 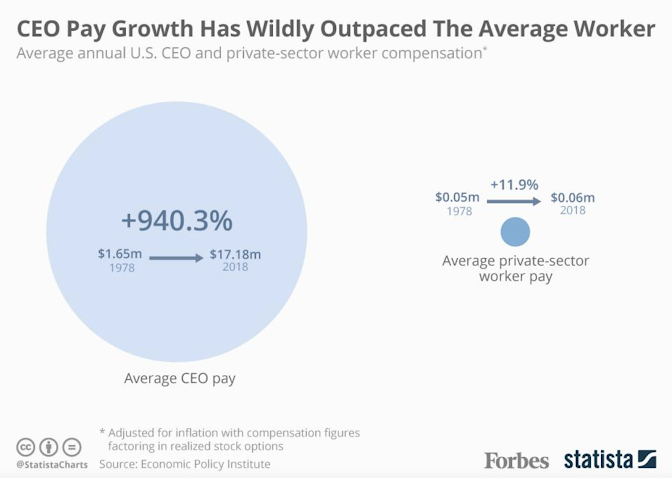 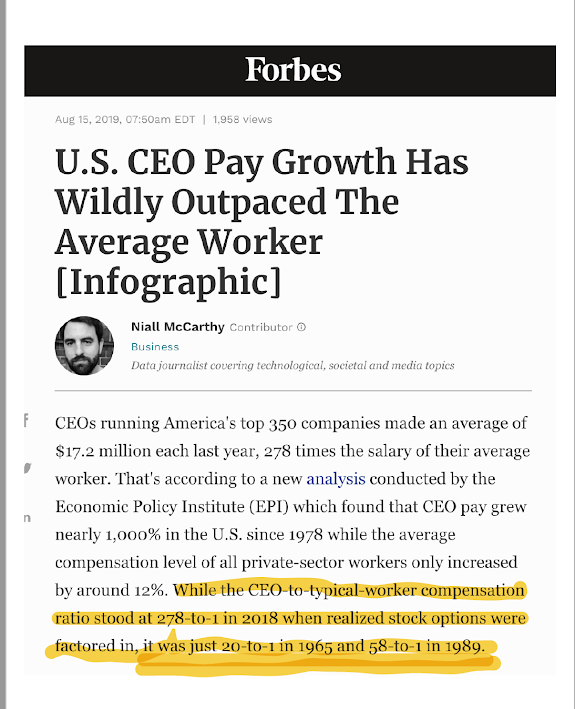 WITT stands for the diametric. We're In This Together.

WITT is really the only hope for our industry, our country, our world.

It means that once again the relationship between hard-work and advancement would prevail. It means that when accounts are lost and revenue plummets--everyone takes a hit. It means that raises are more-or-less equitable, going to the deserved, not just the entitled. It means, haha, employment, loyalty and reward based not on ass-kissing, but maybe on merit and maybe with a notion of doing unto others as you would have them do unto you.

I suppose WITT, if we're going to be fantastical about it, would also be an acronym that informs, if not governs, agency/client relationships.

It's the spirit I've tried to inculcate in GeorgeCo., LLC, a Delaware Company. It's the elan, the manners and the deportment that leads to business success, personal success, pride in work and more.

We've survived the "greed is good" era, barely if you consider the late Trumpian-period as the apotheosis of YOYOism. The culmination (I hope) of roughly two generations of wild and widening inequality. The shredding of the social safety-net. The destruction of the middle-class and the evisceration of the lower-class.

I don't really, right now, have much to do with the industry as dominated by the shareholder monopolists of the big 4 or 5 holding companies. I can make and follow my own rules.

It's friends, like the friends I've mentioned above that concern me. My daughters. The industry I loved.

I think we're in this together, WITT, whether or not we act as if we are. And right now, a lot of people are being YOYO'd to death.