An ode to light. Told by darkness.

I stumbled upon a line by Oscar Wilde the other day that for no apparent reason made me think of advertising as it is practiced in our current advertising "Dark Ages."

Somehow, and for whatever reason, it seems that the entire industry--which includes client-side marketing people--have convinced themselves that the viewing/reading/clicking public has the collective intelligence of a barn-swallow. One that was recently dealt a severe blow to the cranium and has been rendered essentially senseless.

We have basically convinced ourselves that nothing is important except (maybe) a moderately-attractive-looking piece of film, a callow folk singer singing a song writ three-decades before she was born, sinuous twenty-somethings dancing, and some sort of grandiose declaiming. We have forgotten the verities of advertising that existed since advertising began--way back in Sumer, Mesopotamia, some 6,000 years ago.

If you have a camel to sell, write "Can go four days without water." Or "Extra eyelid to keep out sand."

They also want to feel those things that humans have always cherished in interpersonal relationships.

Advertising, at its best, used to convey all that. We didn't go into every assignment saying:

People don't care.
People don't read.
Every product is the same.
No one believes anything.
The only thing they care about is being cool.

In fact, to be obdurate, I'd argue,

The Oscar Wilde line I found was this: "I must decline your invitation owing to a subsequent engagement."

Today's prevailing and all-too-frequently used advertising equivalent is this: "I must decline to do something good owing to the fact that no one cares."

Just now I came upon this spot by the German agency Jung Von Matt. "Agency Spy," usually so snarky, was fulsome in their praise of Jung Von Matt's commercial drivel.

"Hyundai is utilizing some slick camera work and editing to highlight its new Tuscon SUV. Its latest ad, created by German agency Jung Von Matt Neckar, showcases the SUV in various driving conditions—on picturesque desert roads, modern cityscapes, nighttime vistas—in vivid color and jaw-dropping cinematography. Sure, the car might be secondary in the film, but it’s a minute well spent for your eyes."

This is advertising criticism 2021 style. There wasn't a single unique shot or idea in the minute. And frankly, a disquisition on "light" is hardly the means to sell anyone a car, except maybe a photon.

Besides, I'm pretty sure no brand can make a case for being the brand that "owns" light. And copy that says things like, "Light can turn a shadow bright," well, that's copy on the order of this: "Air. It's what we breathe. Through our mouths. And our nostrils. It sustains us. It gives us life. And it's what surrounds, embraces and holds the new Hyundai Snotrag. Air. Three letters that mean so much."

I look at that expensive monstrosity and it makes me hate Hyundai, the actors, the agency and additionally the industry. The spot is so chock full of cliches, it actually sullies everything around it. It is a blight of light brains and unthinking creativity. It told me nothing I didn't know and certainly nothing relevant to me.

And I can hear all the praise and back-slapping and corks-popping and self-congratulations echoing through Jung Von Welcome Mat.

I've always looked to the VW ad below--not an especially famous one--as an example of great advertising. It made me like the brand. It made me want to know the brand. And it makes me want to be one of the people who drove the brand's product.

There's not an ounce of bs, pretense of cliche. Solid and useful information. With warmth and wit.

And I'm not going to discuss this any longer, even if you want me to. I have a subsequent engagement. 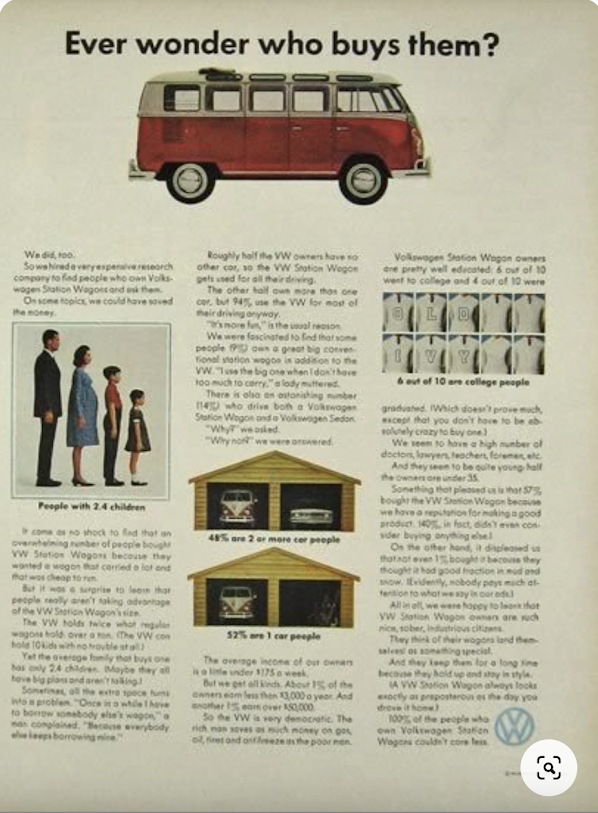