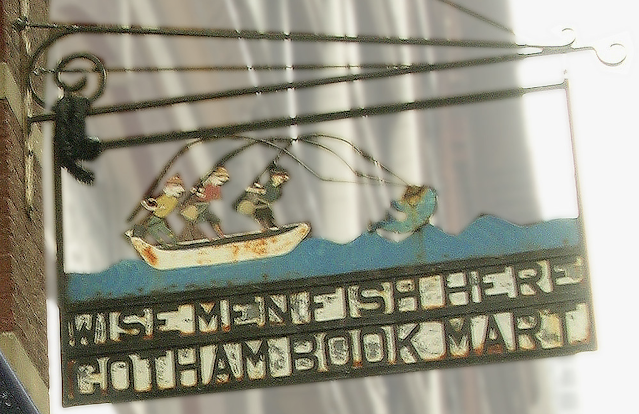 As readers of this blog know, I am a fierce advocate for writing. While writing in advertising has fallen out of favor over the last two or three decades, and it's not unusual (in fact, it's usual) to hear CCOs and ECDs and account people and planners and media people and the cleaning crew that comes in at night and CMOs of Fortune 50 companies declare that, "no one reads," I refuse with the entirety of my heart to buy that assertion.

The very fact that this blog gets around 80,000 readers a week belies the notion of illiteracy. People ain't here for the centerfold. Or Mark Read featured in my annual swimsuit issue.

What's more, with some regularity, I create little all-type ads for my business, GeorgeCo., LLC, a Delaware Company. It happens with some regularity that these tiny little ad units get 50,000 or 100,000 views. These ads have no visuals, only type. Not because I hate visuals, but because my In-Design skills are rudimentary. I can create only the digital equivalent of the Lascaux cave drawings.

I remember many decades ago reading a short tribute to my then boss, the Hall of Fame art director Mike Tesch. Someone said in the piece something like, "Mike believes all marketing problems can be solved with a great :30 spot." His famous Federal Express spots demonstrated that, in spades.

And not long ago, in conversation with my friend, Rob Schwartz, who is quite high up the extension ladder at the TBWA\Chiat\Day assemblage of Agencies of the Year, told me that his ex-boss, Lee Clow, had the habit of saying something like, "when you find a great writer, hire her. There just aren't many of them."

Suffice to say, I believe in writing.

In the power of words to make a difference.

In the power of simplifying complicated thoughts.

And reducing them epigrammatically so they, again in the words of Rob Schwartz, "live rent-free in our brains."

An ex-partner of mine used to say, "Everybody in advertising has a big butt." That is they say things like I'm saying here: "I believe in writing...but."

Yes, I believe in writing, but.

But most people do it badly and without thought, or worse, with too much thought.

Too much thought as in, "let's analyze a simple joke and poke and prod at it and wring it out and fold, spindle and mutilate it until it is a) no longer funny, or b) deemed somehow offensive, or c) so obvious as to be barbarous.

Somehow, we accept banalities. Half of LinkedIn and three-quarters of Twitter are retweeted platitudes that pass for wisdom. That's ok. We like that. Pablum becomes us. Bland doesn't offend. Pointed does.

For instance, if I wrote here this joke: "Did you hear about the pirate who got furious every time his ship floated away? He had Anchor Management issues," in short-order, I would get barbs from Pirates' Rights Advocates--"you're being unfair to an entire profession--some would say a societal cohort. What's next, will you make cannibal jokes? Not recognizing that regarding  cannibalism pejoratively is a western, colonial construct steeped in religious imperialism?"

And then I would get attacked for mocking anger management. Yes, it is a serious problem for many--and I shouldn't deride it.

There's too much of shit like the above everywhere.

Lighten the fuck up.

Finally, there is the too much writing of how people describe their jobs. Recently, I got a connection request on LinkedIn from someone whose appellation was listed as a "Growth Marketer."

It pushed me back in my Herman Miller and led to this long-winded blogpost.

1. Are they marketers whose job it is to preside over shrinkage? "My award-winning staff and I are charged with decreasing sales between 1.5 percent and 2.25 percent every year. We've had some slight setbacks lately, but we are working hard on reversing them into large setbacks."

2. Are they marketers of yeast or tumors or other kinds of growth, like pimples, boils, skin tags and belly fat.

Assume people know you're in it for growth.

Posted by george tannenbaum at 6:40 AM