Misty Water-Colored Memories of the Way We Were. 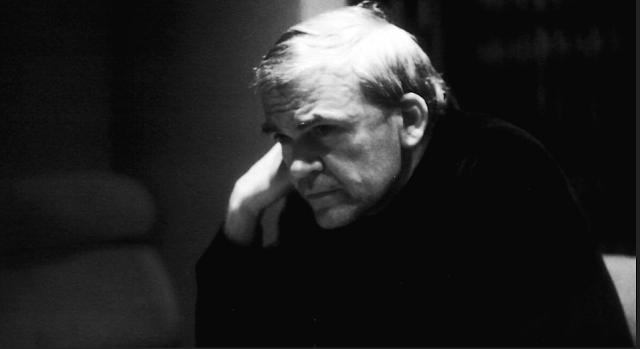 I tripped over a quotation the other morning by the non-Nobel-Prize-winner Czech writer, Milan Kundera.

The sentence is so important that you have my permission to copy it, use it as a screen-saver and even, if you still nominally have a functioning memory, to memorize it.

You might even want to spend three minutes between your invidious and mindless meetings to think about it.

The quotation--and excuse the gendered-ness of Kundera's pronoun choice, is this: "The struggle of man against power is the struggle of memory against forgetting."

A reductive way of rephrasing that (since I have the temerity to re-write Kundera) is this: Those who control memory, control the world.

That, my friends, is today's struggle to be human condensed to fortune-cookie length. If you own the narrative, you own the world. Silencing those who buck up against the narrative--firing them, stripping them, silencing them, beating them is a good way to become king. Or autocrat.

While it would be simpler to talk in grand political terms here, or in terms of American history, I won't.

Instead, I'll focus on what I know best--the struggle against power in the advertising industry.

Power in the advertising industry today rests in the hands of four or five older white men. No judgment about their age or complexion. Just facts.

These are the four or five older white men who routinely take home $20 million + annually, probably for life.

About once-or-twice a year, they and their proxies (the agencies they control) issue proclamations about the importance of Diversity, Equity and Inclusion. They even capitalize the words to show how much they care. 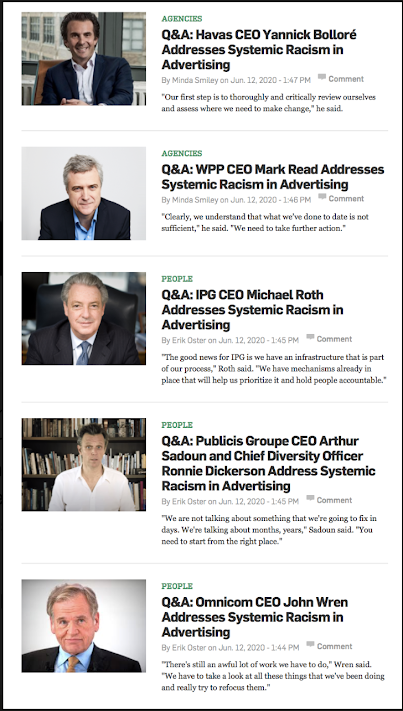 A little over two years ago, all five were interviewed in the trade "press," on what they're doing to address "systemic racism in the advertising industry." You can read my post about it here. (Since I published that post, Michael Roth has retired and he's been replaced by Philippe Krakowsky.)

My two cents re Kundera are that the Holding Company leaders above are hoping we forgot about all their pledges. They don't like memory.

I wrote at the time a plea for Diversity, Equity and Inclusion accountability. I asked:

1. Will any holding company reduce its investment in awards shows, spending that money instead on diversity efforts until equity is achieved?

2. How much is each holding company spending on DEI?

3. How many Diverse employees do they have per salary band?

4. What is their DEI retention rate?

5. What is the median salary of DEI employees? Are they paid wages that would allow them to live in the cities they work?

6. Who qualifies as Diverse? Does it include age? Is it based on background or solely on "race"?

Now let's shift to another facet of memory and forgetting. The idea that holding companies help agencies grow.

What happened to these agencies? A list from my memory of once 100-600-people-businesses that were bought and, in the parlance of South American political prisoners, "disappeared"?

The Holding Companies, in the nearly complete absence of  investigative reporting and therefore accountability, have washed all these "mergures" (merger + failure = mergures) away.

There is no one to report on loss or gain of revenue, employees or any bona-fide calculus of business success.

Don't forget who controls your career.