The news sucks every day.

The solution isn't to stop reading the newspaper. Though the temptation to ignore the world keeps growing greater in me. In fact, everything today from politics, to sports, to business, to entertainment seems horribly, irredeemably corrupt.

The term I stumbled upon not long ago is "systems collapse." Where the cost of upholding a system of order is greater even than the value of the order it upholds.

Why pay for insurance, for instance, or police, or education, if the cost of paying for those things is greater than the benefit they provide. Systems collapse happened during the global economic meltdown in 2008. Why keep up mortgage payments when the value of the house you're buying is well-below the price you're paying.

The most palpable example I've found of systems collapse took place in Knossos about 3000 to 5000 years ago.

And then it just disappeared about 1200 BC.

From hero to zero, as they say.

Knossos had always surrounded itself with walls to protect its citizens. More and more citizens wanted protection, so over time, the circumference of the walls expanded. Soon, the costs of adding more wall overwhelmed the amount of taxes the wall-builders could collect for building those walls. So they stopped building the walls. Then, as they say in the kids' nursery rhymes, "all faw down."

Add to spiritual decay climate catastrophe (in the case of Knossos, a gigantic earthquake) and in the blink of a millennia's eye, Knossos is Kno-more.

The only subject I'm even nominally qualified to write about is advertising. I think the industry is in the late stages of systems collapse as well.

Let's focus on holding company agencies for just one minute.

You can't spit without hitting an article on LinkedIn or somewhere about how hard it is to find and keep people in agency jobs. My (educated) guess is that holding company turnover runs at about 40%. Which means, according to the law of 72, agencies average complete personnel turnover about every 21 months. For those keeping score, that's less than two years.

Then there's this, which should be self-explanatory.  Workers are making more, and getting less. The profits from productivity gains are going to the C-suite, not the you-and-me-suite. 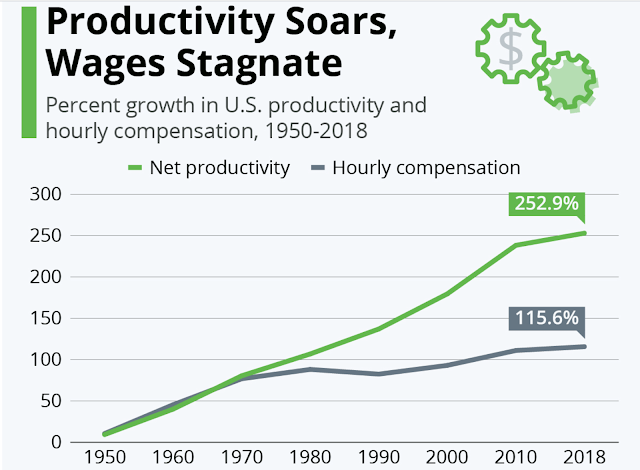 This all seems like a systems collapse recipe to me. Not enough people in the systems have an incentive to keep the system working.

I wonder what would happen--if it's even possible for it to happen without cataclysms and violence--if there were a "great reset." A reset on the order of the one Henry Ford instigated a century ago when he paid his workers $5 a day--five times higher than the prevailing wage. On the supposition that if your workers could afford the products they were making it would be good for business for everyone.

What if the leaders of the ad industry pegged C-suite wages to 100x median workers' salaries? Would they really have a hard time finding a CEO willing to work for $7.5 million? (I'd do it.)

What if the leaders of the ad industry said, "nothing leaves my agency that I wouldn't want my family to see. I will post no ads on fascist sites. Nothing that insults one's intelligence. Nothing that is full of lies and 45-seconds of death disclaimers."

What if the leaders of the ad industry started with "how can I show the people who make me money how much I appreciate their work." Rather than, how can I squeeze the murgatroid out of them to maximize profits.

All the nonsense about Chief Talent Officers, Chief People Officers and Diversity, Inclusion and Equity is so much bushwa unless inclusion means we're all included in making an equitable living.

That's not the case today.

The great reset asks how can I love my people more.
Not how can I get more out of them.

There's a reason customers in today's semantics are called users. First we're used. Then we're used up. Now we're used to it.

Earlier this week a veritable hagiography was unleashed on the death of Dan Wieden of Wieden & Kennedy. Most of it focused, as it should, on the work he and his agency produced.

My guess--and it's only a guess--is that one of the ways Wieden & Kennedy has managed to stay so good for so long involves the attention and care they show toward their employees. I could be completely wrong here. Maybe a Wiedenite will correct me. But I'd guess, unlike so many agencies, management at Wieden spent more time encouraging good work than yelling at people for being in timesheet arrears.

Not a Dan Wieden story, but a Lee Clow story. Maybe a Lou Gehrig to Wieden's Babe Ruth. One day after everyone spent all night getting the work together, this 24x36" sheet of paper was hanging from the ceiling in the studio. 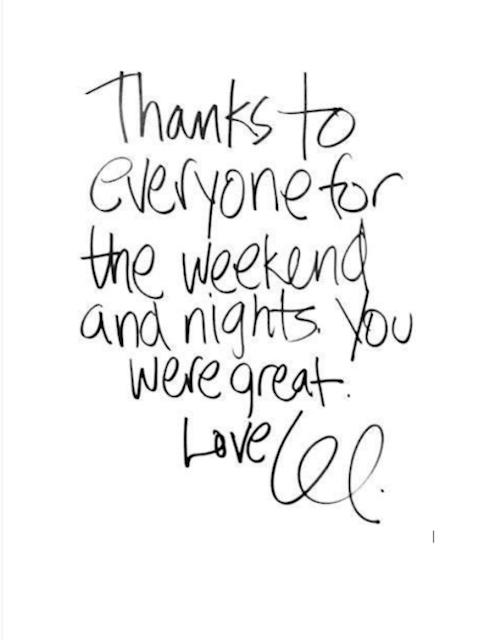 Maybe that's a start of how you reset.

Writing (and showing) the word love.

Posted by george tannenbaum at 8:22 AM