An Essay (and Assay) of Technology. Just about every day there seem to be ten articles or seven about the self-driving-car future. Most of these articles involve some sort of technological mishap. A traffic tie-up or a fender-bender due to misbehaving microchips, or something else.

Maybe it's happening all the time and because there's no "man bites dog" story involved it doesn't become news, but I've yet to hear a single item about commutes being materially shortened, cities becoming decongested, mobility being greatly improved or deliveries becoming more efficient and less expensive.

Likewise, I've heard one-hundred and three thousand stories about Web 3.0, the Metaverse, crypto-currency and microwave popcorn, and I've yet to land on any real advantage any of these disruptive technologies will deliver to my day-to-day life.

If you said to me, driverless cars will reduce transportation costs, pollution and congestion by 30-percent, I'm in.

If you said, Web 3.0 will eliminate surveillance capitalism, privacy exploitation and lessen the smoggy presence of digital exhaust, I'd say, 'sign me up.'

But these things get trotted out and sold hard without anyone letting you in on their great advantages.

Even at my advanced age, if I was quietly working out in the backyard and had somehow developed the "double-S-reverse-rising-sinker pitch" or a "twisker," like the great hurler "Popeye," I could easily gain a major-league tryout. Because I'd be able to do something better than it can currently be done.

Today, I don't know where all the better is.

I see the same thing in advertising, I'm afraid.

I'd guess that about seventy-percent of ad dollars today are being spent on channels that didn't exist when I entered the business 42 years ago.

They're using technologies small minds like mine can't even conceive of.

And here's the thing, for all that newness, I don't know where the better is.

I'm not better informed about products. I'm not more aware. I'm not more amused. And there's hardly a product, person, service or company that I don't think creeps out of the muck of the ninth ring of mercantile hell like the creature from the black lagoon.

We've invented a lot of new.

We haven't invented any better.

This is the giant cosmic plotz of our modern age. 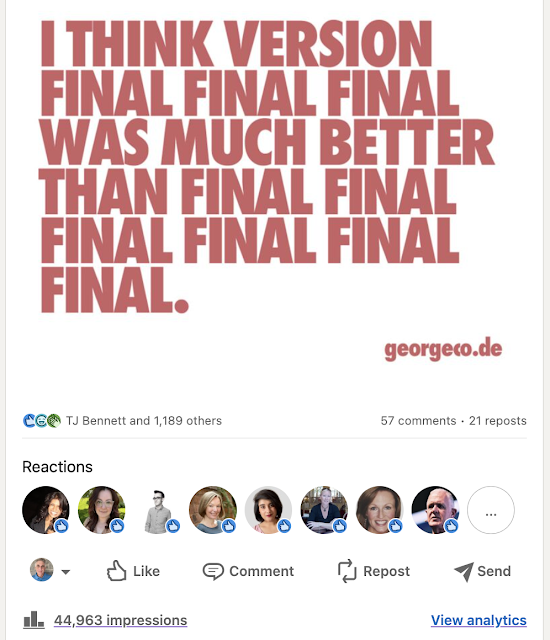 With no media expenditure, no as in zero, this dopey ad got my company's name almost 45,000 impressions in less than one business day. Do I employ social strategists? Technologists? Programmatic presdigitators? Do I need a battery of consultants to plan this shit and then monitor my every minute to make sure I do it, then have 44 meetings to discuss what I've created?

I don't have to reinvent anything new.

I only have to do what's worked in communication since our species became bi-pedal.

When we stood on two feet that led to our vocal chords descending down our trachea. That repositioning gave us the ability to utter a range of morphemes and phonemes other species couldn't replicate. Over time we assigned meanings to them. Eventually, words, language and writing systems were formed.

That's what I do.

I take all those technologies and write something funny and bold. I hope it hands you a smile.

Then I hope for the best.

If something plops like seagull shit on a picnic bologna sandwich, I try something else.

I'm not against new technologies.

Not if they work better than the old ones.

But use what works best.

Until something comes along that works better.

***** By the way, one of the reasons Ogilby fired me
is that their holding company CEO, Mark Read said, "I harken back to the 80s," and don't understand new media. I'd guess my new media ads are out-performing anything Ogilby has ever run for any real client. Much less why mark can't read.

Posted by george tannenbaum at 8:10 AM