Don't be so happy. 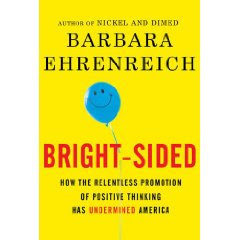 Mirth and merriment, upbeat-ism, pollyanism have become de riguer in both the workplace and in America. Kneejerk positivism is demanded, and if you are a contrarian, or if you point out issues, you are looked upon somehow as blighted.

Many years ago George Bernard Shaw said "The power of accurate observation is commonly called cynicism by those who have not got it." Barbara Ehrenreich's new book, despite getting mediocre reviews in The New York Times, hits the nail on the head, at least as far as I'm concerned. Particularly her title's subhead:"How the relentless promotion of positive thinking has undermined America."

There's an alternative to positivism and negativism. It's called realism, and it involves rolling up your sleeves and making things better.
Posted by george tannenbaum at 8:08 AM