My father and Morrie Arnovich. 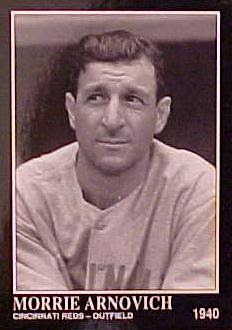 Often my father would tell stories about baseball. Paul Bunyan-esq tales of prodigious talents and Promethean accomplishments. Once he told my brother and me about the longest homerun ever hit since baseball began. Maybe Ruth had hit some gargantuan blasts. Jimmie Foxx had bulging muscles like a blacksmith and a picture-book swing. Mantle almost hit one out of Yankee Stadium, it hit the fringe that ringed the upper deck and was still rising, but none of those came remotely close to horsehide that little Morrie Arnovich hit that Autumn afternoon when my father was just twelve or so.

Arnovich wasn’t a large man, quite the opposite in fact. He stood just 5’10” tall and weighed under 170lbs. “dripping wet,” my father would say. If you thought about Morrie at all, you thought of him as a slick-gloved fielder and a scrappy contact hitter. His batting average was solid, just under .290 for his career and topping out at a highly-respectable .324 in 1939, when “Snooker” finished fifth in the entire National League in batting.

(Here my father might pause for a few minutes and talk about the man who finished seventh in batting that year, Zeke Bonura. Only no one called him Zeke, my father would proclaim, he was always “Bananas.” Bananas Bonura. Bananas needed bananas. They were his secret. They were what enabled him to hit. Once Bonura was up with the game on the line and there were no bananas to be found anywhere, and he whiffed. Whiffed on three straight pitches. But if he had had a banana, watch out. The trouble was, Bonura hated bananas. You see? He hated them, but they held the secret for him. If he could stomach bananas, he could have been a household name. He could have been a DiMaggio or a Mays or even a Mantle. But Bananas hated bananas.)

Anyway, we were talking about little Morrie Arnovich, weren’t we, and the longest homerun ever hit in the history of the game. First, my father would say softly, first I need to tell you about the ballpark Arnovich and the Phillies played in. The stadium, they called it the “cigar box” or the “band box.” Its proper name was Baker Bowl. In centerfield, there was something called “the hump.” The hump was a small hill—right in centerfield, and through that hill, or underneath that hill ran train tracks. In fact, train tracks and trains ran right past the outfield walls.

Now, centerfield was deep in the Bowl, over 400 feet from home. But rightfield was well less than 300, and rightfield is what scrappy Snooker Arnovich was aiming for that fall afternoon, my sons. That’s right, little Morrie Arnovich had the longest homerun in baseball history perfectly planned out.

I forget who was on the mound that day, or even who the Phils were playing, my father would say. It hardly made a difference. Because Snooker Arnovich wasn’t up against a pitcher that afternoon, he was batting against destiny. “And now,” my father would declaim, reciting Thayer, “And now the leather-covered sphere came hurtling through the air.” And, CRACK! The ball met Morrie’s bat. Silence fell over the thousands that packed the ballpark that afternoon. The ball rose slowly, inexorably. Some in the crowd thought it was a mere pop-up but most others sensed that something special had happened.

My father was in a lather. He was whipping my brother and me into a fine froth. But the ball kept rising, rising he reported. It rose past the first baseman. It kept rising as it soared past the rightfielder, it kept rising and rising as it cleared the high rightfield wall. Morrie didn’t even run. He stood at the plate watching. The entire Phillies dugout woke up and climbed up to the fringe of the enclosure. They pointed. Watched. Stared. Everyone in the stadium was on their feet.

And then, my father whispered, the ball descended. S l o w l y. When it finally landed, it was way beyond the outfield fence, way beyond Broad Street. It had landed in the coal car of a passing train and that train didn’t stop until it reached Rochester, New York seven hours later.

That my sons is how Morrie Arnovich, little pipsqueak Morrie Arnovich hit the longest homerun in baseball history. A homerun that traveled 340 miles. All the way to Rochester, New York from Philadelphia, Pennsylvania.

In the Yonkers neighborhood I grew up in, the Yankees were everything. A lot of kids idolized Mickey Mantle, Yogi Berra or Moose Skowron. In my eyes, at least for a brief while, they paled in comparison to Morrie Arnovich.
Posted by george tannenbaum at 3:29 PM