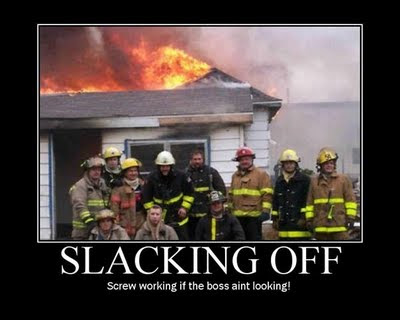 In advertising agencies, there is a small core of people who create the work we sell. Surrounding them are hordes of people who provide "service" or "support." Or people who work for the holding companies and have the word "chief" in their title.

You see the same phenomenon at drug store chains and around the holes utilities dig in the street. There are usually two people working and four or five people watching people work.

This is from Forbes Magazine and written by Michael Maiello and Michael Noer. http://www.forbes.com/2009/10/08/six-figure-slacker-leadership-meetings.html

It's one of the best things I've read in a long time.

Meet the six-figure slacker. Outlook is his clarion, PowerPoint his shield, the white board his sword. From 9 a.m. until just after 6 p.m., if he's in the building he's in one of the conference rooms or in some vice president's office. He is a meeting whore, spending as much time as possible huddled with other executives in small, windowless rooms. He does this because he realized early on that people in meetings never have to do anything, but everyone assumes they are important and powerful because they have to attend so many ... meetings. He is your bane, he is your nemesis, and he's probably sitting in front of the tray of cookies that you would definitely eat if you didn't have to ask him to pass them down.

If he speaks to you, it's probably to reschedule next week's 2 p.m. progress gathering because he'll be attending a workshop in group dynamics at Wynn Las Vegas (slogan: Wynn with teamwork!) He wishes you could go too, but there is no "you" in team. After Vegas, it's off to Vancouver for a two-day overlapping seminar on "Org charts and Venn Diagrams," and then he's back in the office Wednesday but "tied up in meetings all day."

The meeting whore is bad for you because, for every meeting of his that you attend, you wind up having to spend an extra hour in the office catching up on your real work. It's also likely that during his meetings you'll be assigned tasks that you'll be asked to report back on at future meetings. When you bring your notebook and PowerPoint slides to the future meeting, you'll find that all of your work was wasted because the meeting agenda was changed at the last minute. If you confront him about it, you'll be told to be "flexible and open-minded." See the purpose of the meeting isn't to "set limits," it's to "blue sky." It's not about strategy, it's about "why-negy," and "why-negy" is a word that the six-figure slacker just made up. In a future meeting, he'd like you to come up with some ideas about what it means...

...Meetings are the perfect cover because they draw others into the circle of slack. In a truly successful meeting scam, everyone thinks they've accomplished something and it runs long. Also generally there's free food.

A true master will never let "not having an agenda" stand in the way of holding a meeting. He knows that people are uncomfortable with silences in small rooms, and if he sits tapping his BlackBerry long enough (scheduling other meetings, naturally), one of the attendees will say something and a conversation will begin, and it could last hours. If that doesn't happen, the slacker will simply start a question with "If money were no object..." That always gets people talking.
Posted by george tannenbaum at 10:40 AM

Makes me very happy to work in a privately owned agency now. Either everyone pulls their load or they're nicely shown the door--and that's from the top on down.

Teenie, any jobs for an itinerant American?