Thinking about my father. 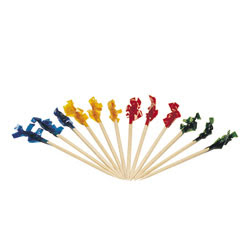 My father was not an ordinary man. For all the crap that he gave me and all the crap I grew up with as a consequence, I've never known anyone who had more ideas and was more rapid-fire with them.

Some ideas were bone-headed, without doubt. He or, more properly, his estate still holds the patent on the self-lighting cigar. It was a simple idea, really, a cigar that had a safety match built into the open end. He came home having developed this idea utterly convinced that this was our ticket out of the rapidly-declining neighborhood we lived in in Yonkers, New York, just over the border from the even more rapidly-declining borough of The Bronx. The self-lighting cigar never did catch on, most of his ideas didn't, but that didn't stop my father from thinking of more and more of them.

I was there when he hatched his most successful scheme. If I remember correctly (I was only about 7 at the time) we were at the bris of a neighbor's kid and after the snipping, Mrs. Moscowitz the host brings out a platter from Deli City. There must have been 60-70 half sandwiches piled high on the platter, each pierced with a single toothpick to keep the sandwiches from falling apart.

I could see the cogs in my father's cranium spinning as he eyed that platter, and he wasn't just thinking about choosing between spiced beef or tongue. "Those toothpicks are drab," he whispered to me. "They say 'toothpick,' when they should be saying 'party.'"

That afternoon when we got home from the bris, he went to his little workroom he had in the corner of our small eat-in kitchen and started glueing small shreds of colored cellophane to one end of some toothpicks he had lifted from Hop Sing, the Chinese restaurant down the block from our house.

In little under an hour, he had constructed a few dozen cellophane-tipped toothpicks in a variety of colors, yellow, red, green and blue. "Now these say festive," declared my father. My mother, as was her disposition, was less sanguine than my father. "Toothpicks," she muttered, "they're hardly US Steel."

Nevertheless, the next Monday he had filed for a patent and was off trying to sell his invention to the top toothpick makers in the area. As is the case with many visionaries, my father was ahead of his time and could find no buyers for his product, so he formed his own toothpick company which he gave the unfortunate name "The Pick of the Litter." He thought, in his first-generation way, that it sounded classy. It never occurred to him that to some it might sound like he picked his toothpicks out of the rubbish.

In any event, after a few years of selling his toothpicks to various bars and restaurants in New York and its environs, he gave up and sold the rights to his invention to the world's largest manufacturer of toothpicks "Pick on Us." They paid him the whopping fee of $175 for his invention.

"Bastards," was all he could say, "bastards." And then he gave me a not-so-loving swat to the back of the head.

That was my father.
Posted by george tannenbaum at 12:30 PM

Karma. That's all I can say.

I read it to my kid. She needed to hear it.

"But George is a big deal and a good guy," she said.

Mmhm, near as I can tell. And so are you, kiddo. That's a better kind of karma.

If what you say is true, your Father's idea has truly been one of the cultural touchstones of 1950s American.

Thank You for your story.