My blood is boiling. 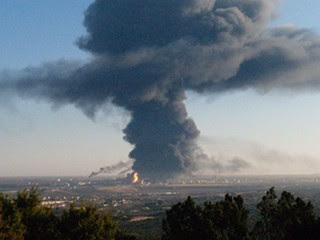 There's an item on the news today that British Petroleum--an ugly company with a beautiful logo--is being fined an OSHA record $87 million dollars for shoddy maintenance and safety measures that resulted in an explosion that killed 15 workers in a Houston-area refinery.

We are supposed to feel that this fine (which BP is fighting) is just recompense for BP's history of criminal negligence.

I'm not a fan of dollar-signs on lives. Can't be done, can it? But it does have to be done. The alternative is obviously worse.

You're so right. That's a pathetic slap on the wrist to BP.

And you can bet they'll fight it down to $37 mill before they'll pay.

Of course they'll fight it down. The rest of a mere $50 mill or so is needed to pay the layers of BP.

I recently had an engineering firm audit our facility for risk assessment. They argued we needed a first response fire fighting team. I said beat it. "You dont think training a couple people to avoid million dollar loss is worth it?" he asked.

Nope.
I was concerned with all the recommendations they put in their final report until higher management told they dont really pay any attention to those reports.

They are the ones who hired the firm. Couple lessons here I think.

Interesting post as for me. I'd like to read something more concerning this topic.
By the way check the design I've made myself A level escort

It is very interesting for me to read this article. Thanks for it. I like such topics and everything that is connected to this matter. I definitely want to read more on that blog soon.

Rather interesting site you've got here. Thanx for it. I like such topics and everything that is connected to this matter. BTW, why don't you change design :).