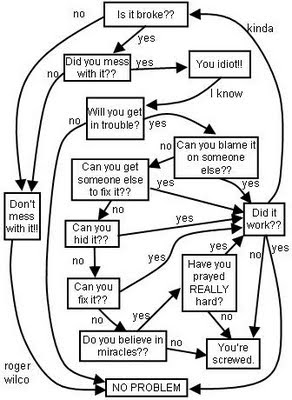 I've often noticed that some of the best books you can read about management are books about the military's creation of high-tech weapons systems. Basically, if you want to run an efficient operation, do the opposite of what the military does.

Right now, I am reading Pulitzer-winner Neil Sheehan's new book "A Fiery Peace in a Cold War. Bernard Schriever and The Ultimate Weapon." This is the story of Schriever's efforts to create an inter-continental ballistic missile before the Soviets were able to do so.

Schriever faced at least three major obstacles. The first was scientific. It's a beast to toss a thousand pound warhead 11,000 miles and put it within a mile of its target. The next two are what's important to us in advertising, though.

Schriever had to stare down the powerful megalomaniac and head of the Air Force, Curtis LeMay. LeMay believed in bombers, not missiles, and did everything he could to keep nuclear-bomb equipped planes as America's weapon of choice. As if LeMay weren't obstacle enough, Schriever also had to cope with the government and military's "bureaucratic octopus." Before a red-cent could be spent, Schriever had to run a gauntlet of 42 potential naysayers.

We deal with that everyday, don't we? The thousand no's on the road to yes. In an era where we are meant to do work more-efficiently, imagine if an agency or agency network said to clients "costs come not from the price of creatives, they come from the 27-weeks it takes to approve a simple print ad that will run twice in Topeka." (I once had an hour argument with a client over a virgule I wanted to use to make a line of type fit better. That argument probably cost the client $5,000.)

Ultimately, President Eisenhower began to understand the importance of Schriever's mission and gave carte blanche to Schriever. It was then Schriever did something revolutionary in the work place. He "pushed authority downward to those who were doing the work."

Can you imagine?
Posted by george tannenbaum at 7:05 AM

Advertising without the ego? Surely you jest...

That chart looks like an MRI of my brain.

Geo, have you read "It's Your Ship: Management Techniques from the Best Damn Ship in the Navy"? It talks extensively about pushing authority downward. Great example: The ship needed to be painted frequently because of rusting bolts. A low-ranking sailor suggested buying stainless steel hardware, but the Navy wouldn't sign off on the extra expense. So the captain had his crew scour every Home Depot in the area to retrofit the ship, which doubled the life of the paint job...so the Navy eventually made the stainless hardware fleetwide protocol because of all the money it saved.

I know there's an agency metaphor in there somewhere.

Nice one Jake. Happens everywhere when someone figures "I will let the next guy worry about it with his budget" instead of doing what it right in the long term.

As long as a client was willing to pay the bill, who cares if there is a better way to do it, saving us time/ money which we could pass on to the client.

Its been done this way forever, thats why we do it this way.

@jeaves, what's sad is that the clients are too bovine to make the connection, let alone do something about it. I look at what my wife's division (over)spends to have a boutique European agency do their ads, and it makes me nuts.

@Teenie, when you own the printing press and run it 24/7, it's no problem!