My father shows me the ropes. 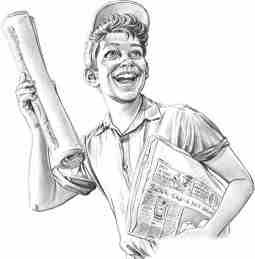 When I was around 12, it was decided I needed to get a job. Getting one would teach me things like responsibility and the value of a buck. I would know what it was like earning a living by the sweat of my brow and the muscle of my arm.

Further, when I was 12, kids had free-time. Or at least I did. My day wasn’t scheduled with activities like soccer practice or piano lessons or, really, anything else. So, lest I hang out after school and thus get into trouble, I was to get a job.

And so it was that I answered an ad in our neighborhood six-day-a-week evening paper “The Daily Argus” to become a paperboy. Not only did you get something like three cents a house a day for delivering your paper, you also got to keep all your tips (these were the days in which, for the most part, women didn’t work, so they were at home to answer the bell and for tips.) There was also a chance, though I never quite figured out how this part worked, to earn “valuable prizes,” I guess for signing up new subscribers or something.

In any event, after a few weeks of waiting, I got a route not far from my parents’ house. It was a short route, as I remember it, of just 43 homes, though that went down to 41 for Saturday delivery because two houses went away for the weekend. As a paperboy, you had a route book, a bag which could hold the papers you had to deliver and a little collection bag, canvas with a heavy brass zipper, for when you collected payment from the houses on your route. You’d take all that money, ride your bike over to the newspaper office where they would count it and give you your three cents per house per day.

You had to keep all the records straight in your route book. That is, I delivered to the Mihailovich’s every day, they paid for the week and gave me a 25-cent tip. That was the way it worked. If everything went smoothly, you could make $10 or $15 a week, (3 cents times 43 homes times 6 days plus tips.) And if you got lucky and had someone like Mrs. Skinner on your route, you were in clover. She gave a dollar tip every week no matter what and sometimes even a couple of cookies as well.

A lot of times things didn’t go right. The guy from the newspaper office would drop the papers on your corner and would give you 39 instead of 43. Then you had to ride your bike home and call for your missing papers and wait. Also, you might catch hell from a customer if you delivered the paper late. They would say things like, “The old paper-boy always had the paper here by 4:15.” It was a politer era, of course, and we didn’t dare say the things we wanted to say.

Then there were the days of rain, snow or howling cold. The newspaper company drummed into us the idea that newspaper delivery was an august responsibility. We should keep in mind Herodotus who wrote: “Neither snow nor rain nor heat nor gloom of night stays these couriers from the swift completion of their appointed rounds.” We were the couriers—the grease that kept the wheels of democracy spinning. Somehow the wheels would stop if we didn’t deliver the paper one rainy day.

But the toughest part about being a paper boy was the distance between the street and the stoop. Jumping off your bike, running up the walk and then back again was a time killer. If you wanted to get through your route and still have some time to goof around with your friends, you had to toss the paper from the street to the stoop. This is where my father excelled.

One evening with a paper that was laying around he showed me how to efficiently fold it into thirds and then tuck the shorter third into the open end of the longer third. Once you had that conquered, you smacked the paper loudly on your thigh. Smack. The paper was now officially folded and ready for tossing. Now you repeated this 43 times or so, filled your paper bag and went off on your route.

The old people in the neighborhood hated when you tossed the paper. So did the newspaper company. I guess they thought that it looked slovenly, or that the paper would wind up in the bushes or coming apart, or that somehow, “we were beating the system” by figuring out a way to not have to get off our bikes and run up the walk.

But to my father, my tossing the paper was everything. It allowed me to break the rules, make more money faster and incorporate his wisdom into the process. That was basically everything he admired. On the few days he was around when I was tossing papers, there was hardly any sound he like hearing more than hearing me slap of the paper against my leg. He had taught me something.
Posted by george tannenbaum at 5:46 PM